Trump Doesn't Care About Facts, But Neither Do His Critics 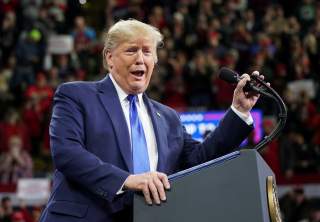 The public debate over how to protect patients with expensive medical conditions is so muddled and uninformed that sometimes President Trump's critics end up matching his ignorance and muddle-headedness.

The most recent controversy concerns (what else?) a pair of missives by the Tweeter-in-Chief.

Mini Mike Bloomberg is spending a lot of money on False Advertising. I was the person who saved Pre-Existing Conditions in your Healthcare, you have it now, while at the same time winning the fight to rid you of the expensive, unfair and very unpopular Individual Mandate.....

49.2K people are talking about this

I stand stronger than anyone in protecting your Healthcare with Pre-Existing Conditions. I am honored to have terminated the very unfair, costly and unpopular individual mandate for you!

78.3K people are talking about this

It is hard to argue Trump's words comport to reality. He seems to be taking credit for ObamaCare's (purported) ban on insurers discriminating against enrollees with preexisting conditions. While he has seemed to suggest in the past that he likes those parts of the Affordable Care Act, his supporters have spun his remarks by saying, no, Trump wants to take care of people with preexisting conditions in a different way. Fine.

The only credible claim Trump could make in this area, however, is that the changes his administration made to short-term, limited duration plans have improved access to care. But while such renewable term health insurance can make coverage more secure for those who develop expensive conditions in the future--and can therefore make the problem of preexisting conditions smaller--they can't really help people who already have preexisting conditions, for the same reason fire insurance can't really help someone whose house has already burned down. The phrase preexisting conditions rather unhelpfully clouds this fact that some medical conditions are simply not insurable. People who actually want to get sick people the health care they need should drop the phrase from their vocabulary and speak only of insurable versus uninsurable medical conditions.

Mini Mike Bloomberg is spending a lot of money on False Advertising. I was the person who saved Pre-Existing Conditions in your Healthcare, you have it now, while at the same time winning the fight to rid you of the expensive, unfair and very unpopular Individual Mandate.....

Glad to see you're watching our ads, @realDonaldTrump. I know management isn't your strong suit, so perhaps you don't know your Justice Department supports a suit that would undermine protections for pre-existing conditions. Now that you know, why not ask them to drop the suit?

4,127 people are talking about this

130 million Americans live every day with pre-existing conditions. They depend on knowing their health care, secured by protections in the ACA, is there when they need it. #ProtectOurCare

4,582 people are talking about this

Rather than amplify a baldfaced lie just going to reiterate the truth: Republicans, including Donald Trump, have engaged in an unrelenting campaign to rip health insurance, including protections for preexisting conditions, from tens of millions of people.

1,697 people are talking about this

Of all of Trump’s lies, his claim that Dems are trying to take away coverage for those with preexisting conditions is the most brazen. Whatever your view of policy, this is just trying to blunt a political weak point by pinning it on the other side. No one on his side flinches. https://twitter.com/realDonaldTrump/status/1216716358676860928 …

....and, if Republicans win in court and take back the House of Represenatives, your healthcare, that I have now brought to the best place in many years, will become the best ever, by far. I will always protect your Pre-Existing Conditions, the Dems will not!

1,844 people are talking about this

Like I said, it's a muddle. Trump makes so many errors because he just assumes he's right. Trump's critics make so many critical errors because that's how orthodoxy works. So long as everyone you like agrees, you don't have to think too much. Which is really not all that different from Trump's approach.

This article by Michael F. Cannon first appeared at the Cato Institute.