The Trump Effect: Illegal Border Crossings Are Way Down 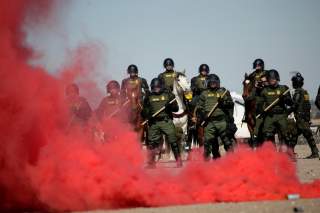 Tremendous progress has been made in slowing the number of illegal border crossers, but there is still a long way to go to fully secure our border.

The Trump administration is successfully building a wall on the border, negotiating with international partners who are helping slow the flow of illegal border crossings, and putting resources into securing the U.S. border.

In May 2019, nearly 150,000 people illegally crossing the U.S.-Mexico border were apprehended by U.S. Customs and Border Protection. Last month, that number had been reduced to about 30,000. Before the surge last year, we would have expected something closer to 10,000 to be caught.

Our aspiration is to prevent all illegal entries into our country. To that end, the Trump administration has been fighting leftists in Congress, the judiciary, and the media. They have attempted to impede efforts to reduce the number of illegal entrants, prevent deportation of those who are here illegally, and obstruct the enforcement of our immigration laws.

Democrats have thwarted efforts to fund the building of a border wall. Even when they have given an inch, it has been cloaked in a veil of regulatory burdens that effectively prevent completion of the wall.

When President Donald Trump has found money and eased regulatory hurdles to building the border wall, the left has searched for and identified conspiratorially complicit judges to issue orders forbidding building. Those orders have universally been overturned on appeal. Thus, the administration’s efforts continue, only after delays caused by the Democrats and the institutional left.

Those delays should be viewed with the understanding that walls actually produce a reduction of illegal entries. The leftists’ desired delays of the barrier has allowed hundreds of thousands of illegal aliens to enter the United States.

The left’s own open-border rhetoric has fueled the criminality that comes with purposefully ignoring our laws. The violation of the rule of law is particularly odious as the civil order and respect for one’s fellow human beings are products of the rule of law and are necessary conditions for freedom to exist. By submarining immigration laws, leftists remove the milieu necessary for perpetuation of the great American experiment in self-governance.

The left is attempting to crash one of the great accomplishments of the Trump administration in securing the border: the Migrant Protection Protocols.

Trump, by carrot and stick, persuaded Mexican President Andrés Manuel López Obrador to place Mexican military personnel on the U.S.-Mexico border and to adhere to international law, which requires an asylum-seeker to wait in the closest country while his asylum claim is processed.

The MPP has allowed the U.S. to remove tens of thousands of Central American asylum-seekers to Mexico to await adjudication of their asylum claims. This took away the incentive to come to the United States illegally from the Northern Triangle states of Nicaragua, El Salvador, and Honduras.

Last week, I led my fourth congressional delegation in the last 15 months to the border to see improvements since the 2019 surge and observe where we still have work to do in order to secure our border. We saw improvements, such as new wall construction and new camera, radio, and lighting towers. All help slow down illegal intruders.

There is still work to be done. In one urban area, less than a half-mile in length, the wall has slowed down the crossers, but between 200-300 illegal aliens cross at that location every week. Other areas remain totally unsecured. Walls work. But illegal crossings continue wherever there is a gap.

Perhaps our friends on the left, who champion the end of the nation-state and rally for open borders, will join with the majority of Americans who love this nation and want our borders secured. Our generous immigration laws still allow more than 1 million people to lawfully enter the United States every year.

It is time to unite for the preservation of our national sovereignty, and that begins by securing our national borders and ensuring the geographical integrity of the country.

Rep. Andy Biggs a Republican, represents Arizona's 5th Congressional District in the U.S. House. He is chairman of the House Freedom Caucus and serves on the Judiciary and Science, Space and Technology committees.

His article first appeared in The Daily Signal on February 26.