Is Trump Enough of a Hawk on China? 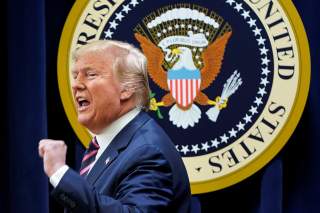 “Early days” is the most obvious response to China hawks left unimpressed by Washington’s “phase one” trade deal with Beijing. After all, the first significant tariffs were levied just a half year ago. Fans of the trade deal also note that these actions come only after years of Beijing, in the words of President Trump, “ripping off” America. So be patient. To use a favorite sports phase, “Trust the process.”

But what result is that process — assuming one can even identify likely next steps for a “phase two” deal — intended to produce? What are the existing tariffs supposed to accomplish? Is it merely a more balanced trading relationship with less predation — or is it something more expansive, something akin to a multi-front New Cold War that eventually “defeats” Chinese communism? The latter certainly seems to be the goal of some on the right, both in and out of government. They often praise Trump for being the first American president to recognize the seriousness of China’s challenge to American global leadership.

But good luck identifying a comprehensive Trump Doctrine toward China that’s anywhere near as ambitious as what the hawks desire. If you read Trump’s tweets about China over the past year or listen to his rallies or track his public statements, he continues to frame the China Challenge in almost purely economic terms. That, whether it’s big trade deficits or the theft of intellectual property or concern that the Chinese economy will overtake America’s as the world’s largest. (Trump is clearly more of a nominal GDP guy than a purchasing power parity guy.) Indeed, it’s become a go-to line in Trump’s public statements that he’s kept the US economy number one in the world.

Again, this isn’t to say there aren’t people in the Trump White House who see China as a military and ideological challenge, as well as an economic one. Clearly, there are. But such views are rarely voiced by Trump himself. Even in terms of economics, Trump continues to show little interest in using trade policy to nudge China away from state-directed capitalism and industrial policy or to decouple Chimerica. For him, it really is still all about cutting better deals with an economic competitor, as if China were merely a bigger version of 1980s Japan. And what Trump says in public is important in guiding public expectations for the relationship and perhaps suggesting that the current trade conflict is just the first skirmish in a long, twilight struggle that will be costly. Just like Cold War Classic.

This piece by James Pethokoukis first appeared at AEI on December 17.