Trump: Europe Should Have Paid Their Fair Share in Ukraine 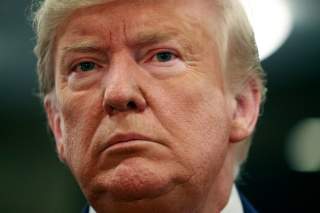 President Donald Trump acknowledged Tuesday that he withheld military aid from Ukraine, but said he did so because other European nations had not paid their fair share.

Trump was responding to questions about a Washington Post report that he directed Mick Mulvaney, his acting chief of staff, to withhold nearly $391 million in military aid to Ukraine days before he had a now-controversial phone call with Ukraine’s president.

“My complaint has always been, and I’d withhold again, and I will continue to withhold until such time as Europe and other nations contribute to Ukraine,” Trump told reporters at the United Nations General Assembly.

“Very importantly, Germany, France, other countries should put up money, and that’s been my complaint from the beginning.”

Trump on report that U.S. withheld aid from the Ukraine: “Those funds were paid, were fully paid. My complaint has always been, and I withhold again, will continue to withhold until such time as Europe and other nations contribute to Ukraine.” https://t.co/LOlwhKc8Ve pic.twitter.com/2IaNqS0KHN

The July 25 phone call and the White House’s handling of the aid package is said to be central to a whistleblower complaint that an intelligence official filed against Trump on Aug. 12. The entire saga has ramped up Democrats’ calls for impeaching Trump, so much so that House Speaker Nancy Pelosi is reportedly gauging considering throwing her support behind impeachment proceedings.

Trump acknowledged speaking to Zelensky about investigating Joe Biden and his son Hunter, but insisted again Tuesday that he did not pressure the European leader to investigate them in exchange for a release of the military aid.

He also pointed out that the military aid was eventually released to Ukraine.

“Those funds were paid. They were fully paid,” he said.

Trump reportedly urged Zelensky to speak with Rudy Giuliani, who has waged a campaign to investigate whether Biden as vice president in 2016 pressured Ukraine’s president at the time to fire a prosecutor who was planning to investigate Burisma Holdings, a natural gas company that allegedly paid Hunter Biden $50,000 a month.

Joe Biden said at a January 2018 Council of Foreign Relations event that he pressured Petro Poroshenko to fire the prosecutor, Viktor Shokin, in order to obtain $1 billion in U.S. loan assistance.

Giuliani and other Trump supporters have said Biden pushed for Shokin’s removal because the prosecutor was about to open an investigation of Burisma. It remains unclear if Biden was aware of Shokin’s plans. The Obama administration and European allies were frustrated at the time with Shokin’s tenure, saying he had not done enough to investigate corruption in Ukraine.

Trump allies have noted the Republican has long been skeptical of spending on foreign aid. He has openly complained that the U.S. far outpaces European members of NATO in funding for the organization.