Trump Has Two Options: Leave the Middle East Or War With Iran 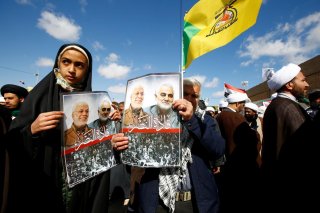 X“Everybody who has touched the Middle East has gotten bogged down.” Candidate Donald Trump rightly pointed this out in October 2015 as he laid out his vision for a foreign policy that would end America’s forever wars and extract America from its Mideast quagmires. Trump not only tapped into public anger toward Washington’s indifference to the American people’s pain and suffering, but he also pointed to America’s indisputable interest in ending misguided foreign adventures and refocus on domestic needs. President Trump, however, speaks of leaving the region while doing precious little about it. Nowhere has his policy contradicted his promise to get out of the Middle East more than his maximum pressure strategy on Iran.

“Our brave troops have now been fighting in the Middle East for almost 19 years,” Trump complained in his State of the Union address in February 2019. "In Afghanistan and Iraq, nearly 7,000 American heroes have given their lives.  More than 52,000 Americans have been badly wounded.  We have spent more than $7 trillion in the Middle East... As a candidate for President, I pledged a new approach.  Great nations do not fight endless wars."

On this, Trump is right. The United States has spent trillions of dollars maintaining military dominance in the Middle East while often fighting other countries’ wars for them. It has done so in the name of establishing stability in the region and security for America. Neither of those objectives has been achieved. U.S. interventions in the Middle East have destabilized the region while incentivizing U.S. allies to forego regional diplomacy and instead spend lobbying dollars in Washington to convince the United States to fight their wars for them. In the meantime, the trillions of dollars spent on weapons systems have left the American people naked and vulnerable to far more likely non-military threats such as COVID-19.

Mindful of the dwindling importance of Middle East oil to the U.S. and the U.S.’s lack of resources and expertise to “fix” dysfunctional states in that region, the cost-benefit analysis of retaining military hegemony in the Middle East no longer makes sense. As Trump correctly quipped last year, “Let someone else fight over this long-bloodstained sand.”

As a Presidential candidate, Trump often pointed to the alternative cost of America’s Middle East wars. "We've spent $4 trillion trying to topple various people that, frankly, if they were there and if we could have spent that $4 trillion in the United States to fix our roads, our bridges, and all of the other problems — our airports and all the other problems we have — we would have been a lot better off,” Trump argued back in 2015.

The American public - and Trump’s base in particular - continue to share these views. A survey of Trump voter attitudes by The Tarrance Group last month revealed that 86% of his base support pulling out of Syria while 58% want troops to leave Iraq as well. An overwhelming majority (66%) prefer diplomacy with Iran, and only 25% favor war with the country.

This is why Trump's policy on Iran is so baffling. True, Trump has not ended any of the endless wars thus far. His agreement with the Taliban will likely only bring down U.S. troop levels to Trump’s own pre-surge levels. In Iraq, the government asked the U.S. to leave, and instead of treating it as an opportunity to bring the troops home, Trump rejected the request and even threatened to sanction Iraq.

On Iran, however, Trump has not only failed to end confrontational policies - he has actively pursued a path that has put the U.S. on the verge of a new war in the Middle East. The policy of maximum pressure has inflicted massive pain on the Iranian economy - its GDP had contracted more than 15% even before the COVID pandemic. Yet, three years after reimposing sanctions, Trump has not only failed to achieve a single one of his objectives, in most cases, Tehran has intensified the very policies Washington has sought to change.

Maximum pressure has not compelled Iran to end uranium enrichment. Instead, Iran has expanded its nuclear activities. It has not ended its ballistic missile program, rather, Tehran has continued and intensified its ballistic missile testing as well as its support for allied groups in Iraq, Palestine, Lebanon, and Yemen. Nor did the assassination of General Qassem Soleimani, arguably Iran’s most important military commander, “deter Iran from conducting or supporting further attacks against United States forces and interests.” In the past few weeks, we have seen more attacks against U.S. troops in Iraq, including several deaths, prompting Trump to issue a threat of war over Twitter on April 1, 2020.

Not surprising, the logical conclusion of economic warfare is military warfare. Rather than securing Iran’s capitulation, maximum pressure has drawn the U.S. closer to yet another war in a region Trump had promised to leave.

None of this is to deny that Iran positions itself as an enemy of the United States, that it has targetted U.S. troops, or that it is entangled in a rivalry with the United States for influence in the Middle East. But so are the Taliban. And for the sake of the higher goal of extracting the U.S. from Mideast quagmires, Trump rightfully moved to bury the hatchet with the Taliban in order to bring U.S. servicemen and women home.

On Iran, Trump has done the opposite even though discarding the reckless rivalry with Tehran is a critical step towards withdrawing from the Middle East. Indeed, why engage in a rivalry for the control of a region you don’t want to control - particularly when the accusations of Iran seeking hegemony in the Middle East are questionable at best and advanced by the very same U.S. “allies” who have their own beef with Tehran and need the U.S. to be entrapped in the region so that it will be forced to fight the Iranians. As former Secretary of Defense Bob Gates said, the Saudis want to fight the Iranians till the last American.

Reality is that all of Trump’s promises to free America from its Mideast misadventures will come to naught if he continues his economic warfare against Iran. He can either leave the region or have war with Iran. He can’t have both.

Trita Parsi is Executive Vice president of the Quincy Institute.

This article by Trita Parsi first appeared in Real Clear Defense on April 30, 2020.