Is Trump Making Money on Hydroxychloroquine? Probably Not. 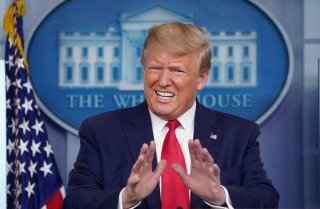 It was one line, in the sixth paragraph of a New York Times story published Monday about President Donald Trump's strident advocacy of the antimalarial drug hydroxychloroquine, that has set off alarm bells across the political spectrum.

The story, authored by reporters Peter Baker, Katie Rogers, David Enrich and Maggie Haberman, starts with an opening anecdote that includes quotes from a White House situation room meeting, in which the president mentions "the heart stuff" as a side effect to the drug before shrugging it off.

It then states that Oracle executive Larry Ellison and Trump attorney Rudy Giuliani have "bolstered" the president's push for use of Hydroxychloroquine, before laying out the contours of the international debate, which includes disagreements within the president's own task force.

But then comes this line: "Mr. Trump himself has a small personal financial interest in Sanofi, the French drugmaker that makes Plaquenil, the brand-name version of hydroxychloroquine." Lower down in the story, the Times provides the detail that, as of disclosures last year, Trump's three family trusts "each had investments in a Dodge & Cox mutual fund, whose largest holding was in Sanofi."

Not long after the piece was published, there was immediate outrage on social media. Trump opponents argued that the Times had seemingly soft-pedaled the potentially explosive information that the president could stand to profit from increased sales of the very drug he'd been aggressively promoting for weeks.

Meanwhile, some Trump supporters, including his eldest son Don Jr., bashed the Times for the very implication, arguing that Trump's financial interest in the company is likely in the low hundreds of dollars.

So how significant is the news that Trump owns a stake in Sanofi? Indications are, not very.

While the most recent disclosures of what Trump owns are from last year, Marketwatch did the math based on the available information.

The Marketwatch report added that Trump also holds positions in European index funds, some of which likely include stakes in Sanofi.

This would provide a good indication of why the Times used the phrase "small personal stake"- and why they stuck the information in the sixth paragraph rather than the first.

Furthermore, Hydroxychloroquine (or Plaquenil, as Sanofi calls it) is an off-patent generic drug, which has been around for more than 60 years. That means, in part, that Sanofi wouldn't be in any position to massively profit from the drug experiencing a sudden surge in sales. In fact, per Marketwatch, Sanofi doesn't even break out the drug by name in its financial accounts, while it does break them out for more than 30 other drugs.

This point was also made on Twitter by George Conway, the longtime Republican lawyer and husband of White House adviser Kellyanne, and a man who is normally no defender of the president.

Possibly more damning, as the Times report pointed out, is that various friends, associates and donors of the president potentially stand to profit from a massive ramp-up in production of the drug.  And whether it's responsible for the president of the United States, who is not a medical doctor, to vocally push a specific drug is another question altogether.