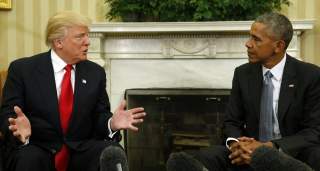 Abraham Lincoln, who preserved the Union and ended slavery, is our greatest president while immediate predecessor James Buchanan, who dithered and dallied while war clouds gathered, is the worst of 43 presidents.

Ronald Reagan, who ended the Cold War without firing a shot and restored Americans’ confidence in themselves, ranks ninth while Barack Obama, who presided over the slowest economic recovery since World War II and failed to live up to his own transformational expectations, ranks 12th.

These are some of the headline findings of C-SPAN’s third survey of historians on presidential leadership, released back in 2017. The survey, following one in 2000 and one in 2009, didn’t include Donald Trump, the 44th man to hold the office.

While in general agreement with my fellow historians (I was honored to be among the 91 experts consulted), I take exception in the following instances:

Notwithstanding Lincoln’s leadership in the Civil War, Washington should be ranked first. Our first president won the war that secured our liberty. And he made wise executive decisions regarding the number of terms a president should serve, his respect for the checks and balances of the Constitution, and his call for a prudent foreign policy.

Although Reagan moved up from 11th to ninth in the latest C-SPAN survey of historians, he belongs in the top five for the reasons I cited earlier plus the lasting economic prosperity sparked by his historic tax cuts.

Reagan certainly deserves it more than Theodore Roosevelt, ranked fourth, who is best known for building the Panama Canal and expanding our system of national parks. Washington, Lincoln, FDR, and Reagan merit the highest ranking because they presided successfully in a time of grave crisis while Theodore Roosevelt, Obama, and Clinton, ranked 16th, did not.

Johnson does not warrant inclusion in the Top 10, despite his record on civil rights, because of his gross mishandling of the Vietnam War (resulting in the deaths of 58,000 Americans) and the overblown promises of the Great Society.

Kennedy may be included only if we measure his presidency in terms of what he might have done rather than what he actually accomplished (such as creating the Peace Corps and initiating the space program that put a man on the moon).

Howard University historian Edna Greene Medford, a member of C-SPAN’s academic advisory team, expressed disappointment that Obama did not receive a higher ranking given what she called his moral authority, administrative skills, and economic management. However, it was Obama’s refusal to work with congressional Republicans that persuaded historians to rank him 39th in the Relations with Congress category and 19th in Administrative Skills.

C-SPAN should be commended for the survey’s exacting 10 criteria, ranging from Public Persuasion and Crisis Leadership to Pursue Equal Justice for All.

The methodology of earlier presidential surveys was, as the journalist Carl Cannon has pointed out, problematic at best. Historians were allowed almost free rein to judge presidents, and their findings usually reflected a liberal bias.

For example, New Deal Democrat Arthur Schlesinger Jr. ranked populist Andrew Jackson as among our greatest chief executives despite his genocidal Indian policies. That is no longer the case: Jackson is rated 18th in the C-SPAN survey.

In his excellent 2008 work “The Leaders We Deserved (and a Few We Didn’t),” biographer Al Felzenberg, a former Heritage Foundation fellow, directly challenged the liberal bias. He provided a set of criteria, from character and competence to economic and foreign policy, that put the presidential ratings game on the track to objectivity as reflected in the C-SPAN survey.

Who knows? Someday the historians may catch up to the people, who ever since his leaving office have put Reagan where he belongs—among the best presidents in American history.

This first appeared in The Daily Signal here (in 2017.)