Trump: People 'Will Be Extremely Shocked' at My Financial Report 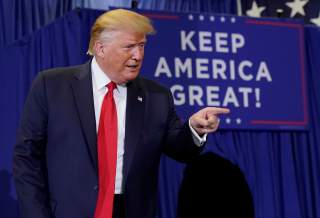 “I’m going to give out my financial condition and you’ll be extremely shocked that the numbers are many, many times what you think. I don’t need to have somebody take a room overnight at a hotel.”

President Donald Trump will release a report on his finances before the 2020 presidential election, he told reporters Monday afternoon.

Democrats have gone after Trump and his personal finances over allegations that he lied about his net worth and assets. These allegations are partially based on testimony from Michael Cohen, Trump’s former personal lawyer, who is serving three years in jail for various offenses. Trump has refused to release his tax returns, blocking efforts from the House Oversight Committee to force him to do so.

Trump told reporters Monday he will be releasing a “financial report” on himself, adding that people “will be extremely shocked.”

“I haven’t found out other than when a plane stops at a massive international airport and gets fuel, I don’t own the airport … I own a lot of different places. Soon you’ll find that out, because I will be — at some point prior to the election — I’m going to be giving out a financial report of me, and it’ll be extremely complete,” Trump told reporters Monday.

“I’m going to give out my financial condition and you’ll be extremely shocked that the numbers are many, many times what you think. I don’t need to have somebody take a room overnight at a hotel.”

A reporter questioned Trump about an Air Force stopover at a Scottish airport, which included a trip to Trump’s Scottish resort. Trump brought up Vice President Mike Pence, who decided to stay at a Trump property in Doonbeg, Ireland. He told the reporter he “didn’t know” about any of that. Both stopovers are being investigated.

The House Oversight’s inquiry is part of a probe into whether the U.S. military is helping Trump profit off properties he owns.

“But he was in Ireland so he said ‘you know what I’ll do? I’ll see my family.’ I didn’t know about that. But I can say he has good taste,” Trump responded.