Trump vs. Darroch: Whose Government Is 'Inept' and 'Dysfunctional?' 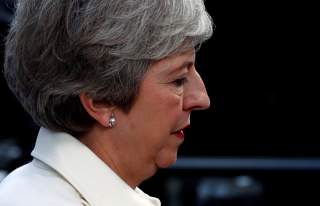 While that is a good question in general, it becomes even more poignant in the case of a British Ambassador from Prime Minister Theresa May’s administration describing another government. To be blunt, the question for the ambassador is: compared to whom?

During the past 30 months of the Trump Administration during which Ambassador Darroch has served in Washington, his government in London has done what? Negotiated, renegotiated, and then re-renegotiated deals for Britain’s orderly withdrawal from the EU, each time unable to mobilize a majority in its own party to ratify those agreements. Suggested and then withdrawn, and then suggested and finally drifted on the issue of a second referendum on Brexit. Threatened to hold new elections, withdrawn the threat, and repeated it as it became ever less credible. Seen the Prime Minister humiliate herself, offering members of her own party her resignation in exchange for their voting for her last and final negotiated Brexit option—only to be refused. And finally, as she resigns in impotence, staggered as it faces the near certainty that her successor as Prime Minister will be the closest analog Britain has ever seen to Donald Trump.

In sum, as the British Ambassador returns to London where both his government and the party he has served is melting down, he leaves a Washington in which the President whose administration he declared “inept” and “dysfunctional”  is in command of his party and on a path towards reelection to a second term in office. A cliché invites the confident to “put your money where your mouth is.” If Sir Kim is as confident in his judgments about the Trump Administration as he has claimed, his first stop after retiring to London should be the betting site Ladbrokes where today he can get even odds on a wager against Trump being reelected in November 2020.