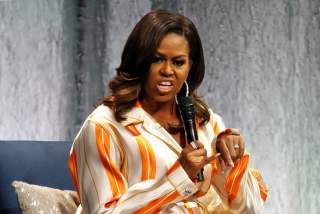 Filmmaker Michael Moore said former first lady Michelle Obama is the one person who could “crush” President Donald Trump in the 2020 election.

Moore went on MSNBC’s “Decision 2020: Post-Debate Analysis” Wednesday evening to break down the Democratic debate. He urged Obama to run for president and said that Trump has to be crushed, because it’s not enough to just beat him.

“The only way to remove Trump is to crush Trump,” Moore said Wednesday. “And that’s the question that has to be asked. Who can crush Trump? Who’s the street fighter? … There is one person that would crush Trump — and she hasn’t announced yet. And her last name rhymes with Obama. In fact, it is Obama —Michelle Obama.”

Former Vice President Joe Biden and Sens. Elizabeth Warren of Massachusetts, Kamala Harris of California and Bernie Sanders of Vermont, all Democratic 2020 candidates, could beat Trump, Moore said. He inquired if anyone had asked Obama about running.

“Well, has anyone asked her?” Moore said. “If asked to serve, I believe she would serve.”

Obama has not made any indication she would run for president in 2020. She is the most admired woman in the world, according to a July YouGov poll.