Trump Won't Like This: Back in 2018, A Good Chunk of the German Air Force Was Inoperable 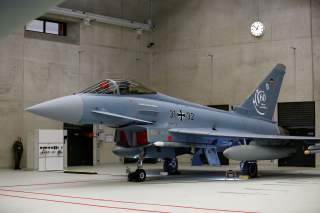 Key point: Berlin has chosen to keep its military weak but it can change its track.

President Trump’s goal of Europe taking more responsibility for its own defense may come crashing to Earth.

Because if Germany’s most advanced fighters can't even fly, then how the U.S. drawback on its European military commitments without undermining the Western security alliance?

The German magazine Spiegel revealed last year that most of the Luftwaffe’s—the modern German air force’s—128 Eurofighter Typhoons are not flightworthy.

In fact, only about ten of the aircraft are ready for operations, Spiegel said. This raises doubts about Germany’s ability to meet its NATO defense commitments.

“The problem is complicated,” according to Spiegel.

“Put simply, all Eurofighters have a sensor on the wings that detects enemy jets or attacks and warns the pilot. About half a year ago, it was discovered that the pod is no longer properly cooled. Since it is central to the self-protection system and this must be active in all operational flights, the number of operational jets drops.

In addition, “although the technicians could replace the defective pods on the wings, they needed a specific spare part to seal the cooling circuit. However, this, according to the sobering response of the industry, is currently unavailable because the manufacturer has been sold.”

The Typhoon, which first flew in 1994, is a multinational collaboration of Britain, Germany, Italy and Spain. More of a close-range dogfighter than a stealth aircraft like the American F-22 and F-35, the Typhoon is flown by the air forces of those four European nations (Austria will retire its Typhoons by 2020), and has been ordered by several Persian Gulf nations, including Saudi Arabia.

But Germany, at least, has been playing games with the Typhoon’s operational readiness, according to Spiegel. “The Luftwaffe counts all Eurofighter jets that are allowed to fly as available. But this includes many who do not have a functioning self-protection system. These may be used with dummies on the wings for training flights or maneuvers. Real missions, such as airspace surveillance on the eastern edge of NATO, are excluded with these jets.”

If these reports are true, it is certainly embarrassing to Germany. But it is also a problem for America. The Trump administration has made clear that it wants Europe to take up a larger share of its own defense instead of relying on America. There are signs that Europe is beginning to grapple with the revelation that Europeans will have to defend themselves.

True, the U.S. military has had problems with aircraft, most recently the grounding of the B-1 bomber. But even if an individual aircraft model like the F-22 has problems with pilots passing out from lack of oxygen, that still leaves thousands of U.S. warplanes to pick up the slack. The Typhoon is the backbone of Germany’s airpower.

Germany is also the economic powerhouse of Europe, and to say it has a strong military tradition would be an understatement, even if it is one that most of its current  inhabitants would rather forget. If the Germans can't be relied upon to maintain an air force, who in Europe can? Especially now that Britain, which along with France is the top military power in Europe, may under Brexit be less likely to participate in common European defense.

The fact is that Germany is the linchpin of Europe, and Europe is what keeps Russia in check. It’s going to be hard for America to withdraw from European defense if Europe can’t maintain its own air forces. Nor can Europe assert a credible threat to defend its interests if its aircraft can't fly.