Is This Trump's Commerce Department's Biggest Power Grab Yet? 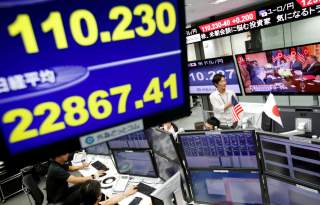 In the days of old, before Donald Trump came to Washington and laid waste to what was once trade policy orthodoxy, a Commerce Department rule change set to take effect on April 6, which will treat undervalued foreign currencies as subsidies subject to duties under the U.S. countervailing duty law, would have been among the year’s most important trade policy developments.

But given the Commerce Department’s enthusiastic partnership in the administration’s project to expand the universe of import transactions subject to tariffs; Trump’s deleterious trade war on fellow Americans trying to transact with people in China; the renegotiation of NAFTA for the purposes of repatriating supply chains and eliminating trade deficits according to the tenets of Gunboat Diplomacy; and the president’s unabashed subversion of the World Trade Organization and the global trade rules, generally, these new regulations seem little more than business as usual.

But they’re not. They will grant the Commerce Department’s Office of Enforcement and Compliance—an agency that can’t utter the word “imports” without the modifier, “unfair”—another weapon to carry out the wishes of U.S. import‐​competing industries (regardless of the cost to others), including their wish to be import‐​competing in name only.

The modifications to the CVD regulations, according to the notice in the Federal Register, will “[C]larify how Commerce will determine the existence of a benefit when examining a subsidy resulting from currency undervaluation and clarify that companies in the traded goods sector of the economy can constitute a group of enterprises for purposes of determining whether a subsidy is specific.” (More on these points shortly.)

These new rules are poorly considered and, especially, do not belong in the hands of a Commerce Department that has overseen an unsavory steel and aluminum tariff exemption process that could inspire the next Martin Scorsese film. According to the Commerce Department’s own Inspector General, the process “is neither transparent nor objective” and has the “appearance of improper influence in decision‐​making for tariff exclusion requests.”

The question of whether and how to respond to foreign currency manipulation (more recently expanded to currency “undervaluation”) has been vexing policymakers for many years. Currency manipulation is said to occur when governments take actions to suppress the values of their currencies in order to advantage their own producers. An undervalued currency, it is argued, essentially serves as a tax on imports and a subsidy for exports.

In 2003, Sen. Chuck Schumer (D‑NY) first introduced his bill calling for a 27.5 percent tariff on all imports from China to compel the Chinese government to permit the yuan to appreciate. Schumer’s idea was roundly rejected in the Senate as a massive consumption tax on the American people—and WTO‐​illegal to boot (remember, this was back when the welfare of consumers and the rule of law were things.) But that setback didn’t stop Schumer from reintroducing the same bill in subsequent Congresses with Sen. Lindsey Graham (R‑SC)—also, to no avail. The measure, which was welcomed by domestic auto and steel producers would have been a disaster for U.S. consumers, who would have had less real income, and for export‐​oriented U.S. producers and their workers, who would have suffered the wrath of foreign retaliation.

Since then, other proposals for dealing with currency manipulation have come and gone—each with its own set of economic, methodological, or political problems. The idea of treating currency manipulation as a countervailable subsidy gained some traction during the legislative push for Trade Promotion Authority in 2015. At that time, Senator Schumer and others tried to attach an amendment to a companion bill to the 2015 Trade Promotion Authority legislation, which would have changed the statute to authorize the use of the countervailing duty law to offset the benefits conferred through an undervalued currency on a country’s exporters. That amendment didn’t survive the reconciliation process.

The idea that currency manipulation should be treated as a subsidy and remedied under the CVD law was embraced early on by the Trump administration. One of the problems confronting those charged with making this happen is that the law (and the WTO’s rules on these matters, which largely mirror U.S. law) requires the “benefit” from the alleged subsidy to be “specific.” This means, for example, that a subsidy must be provided to a specific industry or for a specific purpose in order to be countervailable under the law. Since the value of a country’s currency affects its economy broadly—including its exporters, importers, and import‐​consuming producers—it is hard to imagine that the “benefits” from currency manipulation could be considered specific enough to any particular group.

[E]nterprises that buy or sell goods internationally (i.e., enterprises in the traded goods sector of an economy) can comprise a “group” of enterprises for specificity purposes. The modification fills a gap in section 771(5A)(D) of the Act, which states that a subsidy can be specific if provided to “a group” of enterprises or industries, but does not define the word “group.” Existing 19 CFR 351.502 makes clear that in determining whether there is a “group,” Commerce is not required to determine whether there are shared characteristics among the enterprises or industries that are eligible for, or actually receive, the subsidy.

Commerce goes on to explain that this revision provides further clarification that the “traded goods sector” can be treated as a “group” for purposes of meeting the specificity requirement. Essentially, “specificity” loses its common meaning by being permitted a very broad application.

The other major modification is the addition of 19 CFR 351.528, which “provides guidance for Commerce’s determinations of undervaluation and benefit when examining a potential subsidy resulting from the exchange of an undervalued currency.” This regulation spells out Commerce’s normal practice in determining whether there is a subsidy and how it will calculate the value of the benefit it confers.

But a review of how Schumer came to choose 27.5 percent as his magic number back in 2003 illustrates why Commerce’s new regulation is a big problem. When Schumer introduced his bill, economists were generally in consensus that the Chinese currency was undervalued. But they disagreed widely about the magnitude. Economists from the IMF, the OECD, the Federal Reserve, the U.S Treasury, think tanks, and academia were all producing different estimates of undervaluation. Schumer chose 27.5 percent because it was the midpoint in a range of dozens of these estimates spanning from 10 percent to 45 percent.

More important than the imprecision in Schumer’s approach is the fact that reputable economists from esteemed institutions disagreed widely in their estimates of undervaluation. This meant that they took different approaches to estimating the difference between the yuan’s actual value and its true market value, which reveals that there is no consensus among economists about how to estimate currency undervaluation because there is disagreement about how to ascertain the true market value of a currency unless it is free‐​floating and determined by its supply and demand. This conclusion yields some important implications.

Considering that economists’ estimates of Chinese currency undervaluation varied by as much as 35 percentage points, and that any methodology employed by the U.S. Department of Commerce—in its zeal to protect domestic producers above all else—would certainly differ from one employed by an economist at the OECD or the IMF or MIT, countervailing duties would likely worsen any distortions caused by currency manipulation and inflict collateral damage on consumers and import‐​using producers.

As the Peterson Institute’s Fred Bergsten lamented after years of trying to make it work:

Determining the existence and extent of currency misalignment, especially as a possible trigger for remedial action [i.e., specifically, the application of countervailing duties under the Countervailing Duty law], has proven enormously difficult, however, both intellectually and politically. Numerous conceptual approaches to defining and measuring currency “misalignment” have been attempted. The IMF uses three different measures that often produce very different results. Most official discussions, and even many academic efforts, have foundered at this initial level.

Second, this doesn’t account for the costs incurred by exporters on their imported intermediate goods. Any benefits that may accrue to exporters from an undervalued currency must be offset by the higher costs of imported raw materials and intermediate goods consumed in production of the exported product. One person raised this issue with the Commerce Department after it published the proposed regulations, but Commerce was dismissive of it: