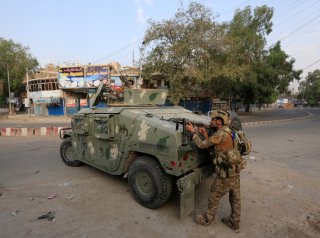 To win a war or to win a battle within a war is often a slippery slope for most policymakers. When it comes to Afghanistan, however, the U.S. administration might, unfortunately, be staring at losing both the war and the battle.

Here’s why: President Donald Trump appears not to understand the two basic rules of dealing with insurgents. First, the counterinsurgents need to win all the time, every time. Whereas, the insurgents only need to avoid losing in order to remain in the game. This tends to tip the balance in favor of the insurgents. Second, you just can’t talk peace with insurgents when they’re in the ascendancy. That might be good politics, but strategically speaking, that sets an administration dealing with insurgents up for disaster. I don’t feel the need to remind the learned readers of the numerous instances the Taliban have carried out terrorist activities right before, during, or immediately after sitting on the table talking peace with the U.S. officials.

Are such attacks carried out due to sheer desperation on insurgents’ end? No. Are such attacks bound to (have) happen(ed) anyway with or without the Taliban having a seat at the negotiating table? Maybe. Are such attacks a result of a poorly thought out policy option of negotiating with the insurgents without first having their backs against the wall? Absolutely. The idea of peace talks in Afghanistan is great, but the United States continues to get it wrong in terms of how and when to go about it. Negotiations with the insurgents (of which troop withdrawal is a significant part of) isn’t only a matter of if, but also how. The roadmap matters, too.

When the Trump administration signed the peace deal with the Taliban in February, the main component of the agreement was the drawdown of U.S. troops from 14,000 to 8,600. It might have been hailed as a landmark achievement by many back then, but it was a flawed policy option to give the Taliban the leverage they’ve been looking for without having them bring anything substantial—other than the same old assurances—to the table. However, President Trump’s latest announcement during an interview that was filmed last week, but aired earlier this week, of a further withdrawal of U.S. troops from Afghanistan before the November elections is even more problematic on many counts.

First, the current security environment in Afghanistan. The situation is quite fragile, to say the least. The government in Kabul is in no shape to ward off the insurgents and the terrorists, and the further drawdown of forces without the Taliban shedding violence is only going to make matters worse. Even the top government officials in Afghanistan have until recently vowed to up the ante against the Taliban. Even amid the latest three-day ceasefire announced by the Taliban last week, a dastardly attack was carried out at an Afghan prison where Taliban and Islamic State militants were held. Twenty-nine people died, and 1,000 prisoners escaped. The Islamic State claimed responsibility for the attack, but it doesn’t take much to connect the dots, does it? The Trump administration needs to make a call whether it would want to help the Afghanistan government and the forces to bring peace and stability in the country by trying to decimate the insurgents and terrorists from within, or just pack the bags and leave the country, bringing to naught the 19-year effort in Afghanistan?

Second, Unit 29155 of Russia’s military intelligence agency (GRU). This specific unit of the GRU has many successfully completed foreign assignments to its credit. The US intelligence community is of the view that the unit has been instrumental in spearheading the suspected bounty program offered to the Taliban to kill U.S. forces in Afghanistan. Assuming the bounties were indeed offered, it’s interesting to decode what the Taliban might be thinking right now. For the insurgents, the United States is offering everything they’re asking for: a seat on the negotiating table when, in fact, the government in Kabul should’ve been the one, instead, calling the shots in the first place, and the United states acceding to the troop withdrawal demand without the insurgent group having to deliver anything meaningful in return. And, to top it off, they’re, allegedly, paid by the Russians to kill the U.S. forces—all while talking peace with the Trump administration. Can it get any better for the Taliban?

Third, the regional nuances. With a further drawdown of U.S. forces without halting the Taliban’s ability to strike, as and when they please, is likely to strengthen the Islamic State and bring other actors in to try and fill the vacuum in Afghanistan. Leaving Afghanistan without a cogent security apparatus could prove disastrous. President Trump might choose the easier option of ending the war in Afghanistan, but the consequences of doing so can be catastrophic. The least the United States—and the world—needs right now is a repeat of what had transpired in Iraq fifteen years ago.

President Trump needs to stop playing into the hands of the insurgents. He’s been doing that for far too long now. It was never a good idea to start with anyway, but the ramifications could be even worse now. The question remains: does the idea of a political victory in November outweigh the idea of achieving any strategic objectives in Afghanistan? Well, we’ll find out soon enough.

Shazar Shafqat is a terrorism analyst and currently consults on terrorism and terrorism financing related issues. He’s also a Certified Anti-Money Laundering Specialist and a Certified Financial Crime Specialist, and previously taught at the National Defence University (NDU) in Islamabad.