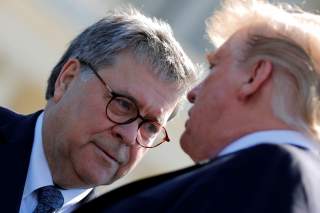 What happens to the rule of law when even the top law enforcement official in the land refuses to obey it?

That’s the question raised in a stinging rebuke of Attorney General William Barr and his Justice Department that came from an unusual source earlier this year: Federal Appeals Court Judge Frank Easterbrook.

Easterbrook excoriated Barr and the department for defying an order issued by his court.

The order in question concerned the case of Jorge Baez-Sanchez, a man living in the U.S. illegally, who was convicted of aggravated battery of a police officer and scheduled to be deported. Easterbrook quoted a letter from Attorney General Barr to the Justice Department’s Board of Immigration Appeals saying that the Seventh Circuit decision stopping that deportation was “incorrect” and need not be followed.

Responding to Barr’s assertion, Easterbrook insisted that while executive branch officials “are free to maintain … that our decision is mistaken … until the court reverses itself the Executive Branch must honor that decision.” Easterbrook said the Constitution gives courts the right to make conclusive decisions, which are not subject to disapproval or revision by another branch of government.

As someone who has studied what happens when public officials violate the law, I find Barr’s defiance reminiscent of other times in American history when powerful figures challenged the authority of the courts. Such challenges risk undermining the authority of the Constitution in the eyes of everyday Americans.

The courts’ authority to interpret the law is derived from an 1803 Supreme Court decision, Marbury v. Madison, not from the Constitution itself. William Marbury, who had been appointed a justice of the peace by outgoing President John Adams, was denied the official commission for that office by James Madison, secretary of state in the incoming Jefferson administration. Marbury asked the Supreme Court to order Madison to deliver his commission. The court held that the Judiciary Act of 1789, which Marbury said gave it the power to do so, violated the Constitution. As a result, it could not provide the relief Marbury sought.

And, since that decision, from time to time political leaders have questioned the courts’ authority.

President Andrew Jackson mounted one of the most important of those challenges when he refused to enforce an 1832 Supreme Court ruling that the states could not regulate Native American land.

After that ruling, Jackson took a swipe at, the court’s chief justice: “John Marshall has made his decision, now let him enforce it.”

Moreover, that same year, Jackson vetoed an act of Congress granting a charter for the Second Bank of the United States on the grounds that the bank was unconstitutional. He did so despite an 1819 Supreme Court decision affirming its constitutionality.

In his veto message, Jackson invoked the separation of powers and said, “The opinion of the judges has no more authority over Congress than the opinion of Congress has over the judges, and on that point the president is independent of both. The authority of the Supreme Court must not, therefore, be permitted to control the Congress or the Executive when acting in their legislative capacities, but to have only such influence as the force of their reasoning may deserve.”

Jackson’s effort to stop the National Bank ultimately prevailed when it was replaced by an independent federal treasury system.

A little more than a century later, in the immediate aftermath of the 1954 landmark school desegregation ruling, Brown v. Board of Education, Southern political leaders, including members of Congress, followed Jackson’s example.

In 1956 they issued a “Southern Manifesto,” which called Brown a “clear abuse of judicial power.” The manifesto commended states for resisting forced integration of schools and claimed states had the right to defy federal court orders that they regarded as incorrect.

One of the most blatant examples of such resistance occurred in Little Rock, Arkansas, in 1957. Responding to a federal district court which ordered the immediate integration of the schools, Governor Orval Faubus called out the National Guard to stop black children from attending Central High School.

When lawyers for those black children sought help from the United States Supreme Court, the court – anticipating Easterbrook’s response to Barr – rebuked the Arkansas governor and reaffirmed the desegregation order.

Justice Felix Frankfurter wrote that “Every act of government may be challenged by an appeal to law, as finally pronounced by this Court. Even this Court has the last say only for a time. Being composed of fallible men, it may err. But revision of its errors must be by orderly process of law.”

And, despite his own reservations about the Brown decision, President Dwight Eisenhower sent federal troops to Little Rock to enforce the court order.

In 2015, a deeply divided Supreme Court ruled that the Constitution protected the right of same-sex couples to marry.

Opposition to the decision came quickly. Some local officials announced that, because same-sex unions violated their religious beliefs, they would not issue marriage licenses to gay and lesbian couples.

One of the resisters, Katie Lang, county clerk of Hood County, Texas, said that the Supreme Court had “fabricated a new constitutional right” which could not “diminish, overrule, or call into question the First Amendment rights to free exercise of religion that formed the first freedom in the Bill of Rights in 1791.”

She was supported by Texas Attorney General Ken Paxton, who told county clerks and judges that they did not have to issue same-sex marriage licenses or conduct wedding ceremonies “if they have religious objections to doing so.”

Separation of powers, states’ rights and religious freedom each have been invoked as a justification for official noncompliance with court orders. Attorney General Barr adds his broad view of executive power to that list of reasons.

Yet no matter what the reason, any time government officials defy the courts, they undermine the Constitution’s authority and send a powerful message to citizens. Today many Americans seem ready to heed that message, with a quarter of the respondents to national surveys now saying that a president should be able to disobey court decisions with which he disagrees.

While the rule of law survived Jackson, massive resistance in the South, and defiance of the Supreme Court’s gay marriage decision, there is something particularly perilous when the attorney general defies the courts. As a 1980 opinion of the department’s Office of Legal Counsel noted, it is his responsibility “to defend and enforce both the Acts of Congress and the Constitution.”

That danger is compounded at a time when the president repeatedly expresses his view that judges are really nothing more than partisans in black robes and derides them and their decisions.

Supreme Court Justice Louis Brandeis correctly observed almost a century ago that, “In a government of laws, the existence of the government will be imperiled if it fails to observe the law scrupulously. If the Government becomes a lawbreaker, it breeds contempt for law; it invites every man to become a law unto himself; it invites anarchy.”

This article is being republished from The Conversation via a Creative Commons license. Read the original article here.