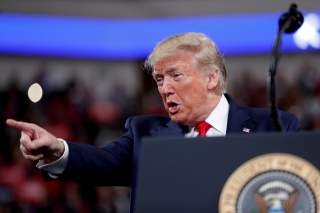 More than a year and a half since the Trump administration’s “maximum pressure” campaign against Iran began, Washington is no closer to taming the country’s behavior or getting a “better deal” with Tehran.  President Trump needs to accept the reality in front of him: The problems posed by Iran are not going to be solved by more sanctions, isolation, or military deployments. It’s time to ditch the failed maximum pressure strategy and engage in pragmatic diplomacy.

The logic behind maximum pressure was simple: By slashing Iran’s oil exports, deterring foreign businesses from investing in the Iranian market, and shutting Iran out of the global financial system, Washington would force political leadership in Tehran to come begging for economic relief.

As the world’s dominant financial powerhouse, there was never any doubt the U.S. could strangle Iran’s economy.

Oil exports have declined from 2.8 million barrels a day in the spring of 2018 to less than 500,000 barrels per day in September, a reduction of more than 80 percent.  The International Monetary Fund projects the Iranian economy to contract by more than 9 percent once the year is up, a number that will inevitably worsen the unemployment rate and contribute to a sense of disillusionment among younger Iranians entering the workforce.

All these figures, however, don’t make up for the big picture: Despite the stress on Tehran’s economy, maximum pressure is having a counterproductive effect.

It's true the Iranian government is bleeding money.  But so are ordinary Iranians, whose lives have gotten tougher as a result of U.S. policy. Their recent, widespread protests over economic woes have been hit by the deadliest security crackdown Iran has seen in a decade.  The value of Iran’s currency has atrophied due to an inflation problem authorities have had difficulty controlling.  A less valuable currency means goods on the shelf are more expensive; according to Iran’s Statistical Center, food prices have risen by 61 percent, and clothing prices have increased by 51 percent over a 12-month period.  As is often the case, the poorest Iranians will suffer the most.  While much of the blame can be placed on Iran’s systemic economic mismanagement, U.S. sanctions haven’t added to Iranians’ misery.

Given such poor results, the economic pain the U.S. is inflicting on Iran can hardly be justified.  In the 19 months since the administration withdrew from the Joint Comprehensive Plan of Action (JCPOA) and reinstated economic penalties lifted under the deal, there is no evidence that Iran is more amenable to U.S. demands.  Rather than sending representatives to the negotiating room and hashing out a more far-reaching agreement on Washington’s terms, Tehran is responding to maximum pressure with maximum resistance.

In retaliation, Iranian officials have spent 2019 systematically reneging on its own commitments —enriching higher-grade uranium, exceeding the uranium stockpile that was capped under the JCPOA; and reinstalling advanced centrifuges previously put in storage.  In November, Iran announced the resumption of uranium enrichment operations at its Fordow site.  If developments continue, there is a possibility Iran will cease cooperating with the International Atomic Energy Agency, as Iran’s speaker of parliament stated this month.

Meanwhile, Tehran has become —sabotaging and capturing vessels in the Persian Gulf, shooting down U.S. surveillance drones, and allegedly conducting the worst attack on Saudi Arabia’s oil industry in history.  Were it not for a last-minute decision by President Trump, Washington and Tehran could have engaged in an unpredictable shooting war last summer.

In short, proponents of maximum pressure have been wrong every step of the way.

The time is ripe for a dramatic but sensible shift in U.S. policy.  Trump campaigned as someone who would restore realism in U.S. foreign policy and strike solid deals on behalf of U.S. national security.  This is precisely what he should do.  Instead of moving closer to unnecessary conflict, the president should authorize new talks with Iran immediately.

For a fresh negotiation to have any chance of success, Washington and Tehran will need to arrive at a pragmatic arrangement in the short-term.  That arrangement is relatively straightforward: in exchange for Iran coming back into compliance with its obligations under the 2015 nuclear deal, the U.S. would reissue waivers that permit Tehran to sell its oil on the market.  The Trump administration would have to return to the pre-maximum pressure status quo before it withdrew from the nuclear deal and slapped stringent restrictions on the Iranian economy.  Iranian President Hassan Rouhani has insisted repeatedly that such changes would allow him to re-enter negotiations with Washington.  He reiterated that message to the Iranian people on December 4.

Such an about-face may be a tough pill for the president to swallow, but the diplomatic and security benefits of a policy change outweigh the political costs.  By stabilizing the situation, Trump will have not only prevented a repeat of the dangerous tension of last summer but created an opportunity to resolve substantive disputes between the U.S. and Iran peacefully.

The American people expect statesmanship from their foreign policy leaders.  There is nothing more illustrative of U.S. leadership than demonstrating the courage to talk to your adversary.