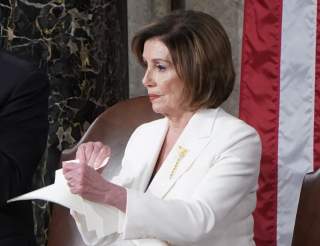 A dominant and confident President Trump delivered one of the most memorable State of the Union speeches in years on Tuesday night, making his opposition look small and defeated.

Republicans cheered as President Trump venerated one of the Tuskegee Airmen, reunited a deployed soldier with his surprised wife and kids, and had the stunning First Lady place the Medal of Freedom around the neck of Rush Limbaugh, one of the heroes of the new right that Trump has helped to build.

Democrats were left sitting on their hands.

They didn’t cheer when Trump lauded a blue-collar boom.

They didn’t cheer when he celebrated record-low unemployment for blacks, veterans, and disabled people.

They didn’t cheer when he announced that a black single mom could send her daughter to the school of her choice.

Thus did the party that once stood for all Americans sharing in our nation’s prosperity become one in which ideology and personal hatred of the president overshadow all other considerations.

The icing on the cake came at the end of the speech, as Trump waxed grandly and optimistically about “unlimited frontiers waiting to be explored” and the American adventure only just beginning. It was at that point that Democrat Speaker Nancy Pelosi ostentatiously tore up her copy of Trump’s speech for all of America to see.

In fact, there’s no precedent for it in American history.  It was a far more egregious breach of protocol and courtesy than when Rep. Joe Wilson (R-South Carolina) yelled “You lie!” during a joint address to Congress by Obama in 2009. Pelosi engineered a resolution of disapproval to rebuke Wilson at the time. He was merely a member of the minority party whereas she is Speaker of the House. What will be her punishment?

Ultimately it will have to be political. Throughout the address, the Democrats looked small and childish. Pelosi’s act was a bush-league spasm of self-indulgence, which could easily describe congressional Democrats’ conduct since Trump became president. They have accomplished nothing other than being a mild nuisance, but have indulged their ideological instinct to cry and pout at everything Trump says and does.

Like the U.K. Labour Party, they have indulged their far-left wing. Like U.K. Labour, they may have a near-miss with extinction very soon.

More broadly, Trump revealed anew that he is the master showman, surpassing even Reagan, who came to the presidency after a career in acting and entertaining. Reagan was the first to have a special guest in the audience for his 1982 State of the Union address. Every president has followed suit, but Trump took it to a new level with his multitude of heroes from various walks of American life.

I used to lament this hootenanny element of these annual speeches, but the plain fact is that they are far more useful than any policy wonkery (ahem, Bill Clinton) in outlining what policies are meant to produce in the real world, and what type of America we want to build or preserve.

Despite all of the presidency’s power, which Congress diminished in the second half of the 20th century but Trump is partially restoring, the bully pulpit remains any president’s best tool. The office is inherently a rhetorical one.

Trump gets that and uses it better than most, and there is no chance he will succumb to the usual curse that faces first-term presidents seeking reelection: rusty debating skills and detachment from being inside a bubble for four years.

Amid an economic boom, coming on a week when he will be vindicated by the Senate after ad nauseum persecution, and as Democrats flail in Washington and on the campaign trail, Trump can honestly say he has kicked off his reelection better than any modern president.

Christian Whiton, a senior fellow at the Center for the National Interest, is the author of Smart Power: Between Diplomacy and War. He was a State Department senior advisor during the George W. Bush administration.