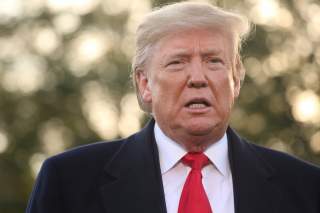 With every economic report that fails to show the US economy consistently growing by at least 3 percent or business investment booming, it may seem increasingly obvious that the 2017 Tax Cut and Jobs Act is a bust. At least it’s obvious to partisan pundits and the progressive Twitterverse. They’ve already called the time of death for this key piece of Trumponomics.

Now certainly the Trump tax cuts are looking like failed politics. They’re not popular, polls suggest, and most people don’t think they got a tax cut. This isn’t surprising. Supporters oversold the immediacy and power of the TCJA’s impact, as well as the nature of its pro-growth mechanism. Actually both sides misunderstood (and continue to misunderstand) how the corporate tax reform part of the TCJA was supposed to work. It was never about — at least from a proper economic perspective — companies using their tax savings to make more investments, hire more workers, and pay higher wages. Likewise the case for a corporate tax rate reduction isn’t undercut by the rise in stock buybacks.

Rather, explains AEI’s Alan Viard in a recent blog series on the Trump tax cuts, companies make new investments because they expect to pay lower future taxes on those investments. Viard: “Corporations increase their US investments because the corporate tax cut lets them keep more of the profits from those investments, thereby making such investments more lucrative. So it’s all about after-tax profitability — hardly a controversial bit of standard economic theory that has nothing to do with the Laffer Curve — which may eventually lead to higher worker wages. But that’s the last step in the process.

All of which raises a few good questions. Viard: “So far, a sharp uptick in investment has not occurred. Is that because the corporate tax cut is not boosting investment? Or because the boost is taking longer than expected? Or has the tax cut boosted investment relative to what it would otherwise have been, even as other factors (perhaps other TCJA provisions or the trade war) have offset the boost?” It’s certainly worth noting that business investment since the TCJA passage has been faster than the pre-tax cut CBO forecast for the period.

“Too soon to tell” may seem like a copout. But as economist Jason Furman notes elsewhere in the blog series, “Even if we could extract the signal from the noise, it is too early to tell whether the law is living up to its goal of increasing business investment and capital stock over the medium and long run,” while adding that “there is little reason to believe the TCJA substantially boosted investment to date.”

It’s also important to keep in mind that despite the significance of the tax reform, Viard adds, moderate assumptions suggest GDP and wages might permanently rise by about 1 percent, perhaps through an increase in the growth rate of 0.1 percent per year for 10 years. All else equal, the TCJA never was going to supply the sort of economic oomph that would “boost the economy’s annual growth rate from its previously projected 1.9 percent to 3 percent, let alone 4 or 6 percent.” Tax reform is indeed part of policy mix to get faster growth. But it’s only one ingredient.

James Pethokoukis is the editor of the AEIdeas blog and the DeWitt Wallace Fellow at the American Enterprise Institute.