The Truth Is Out There: The Search for Alien Life Continues 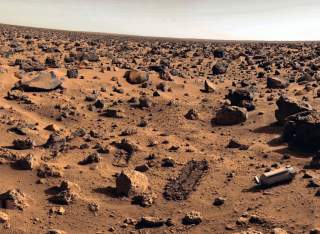 Earth’s oldest fossils may be billions of years old – although such claims are highly controversial. These kinds of discoveries usually start with finding what appear to be preserved outlines of microscopic lifeforms that look similar to microbe fossils found in much younger rocks. The rewards for exploring truly ancient life are high, because as well as providing a glimpse at some of the earliest life on Earth, these microfossils can also act as a model for what evidence we might find for life on other planets such as Mars.

But how do we know these really are fossils and not some other non-organic geological feature? In 1996, Nasa scientists claimed micro-structures in a meteorite could be the remains of extraterrestrial life, but further investigation suggested the structures didn’t have biological origins after all.

A recent study, published in Royal Society B, has further examined this question by demonstrating how it is possible for some microfossil-like objects to form without any actual microbes. This study may lead to doubts about specific fossils. But ultimately it will help scientists focus their attention on the strongest and most likely case studies for the earliest evidence of life – on this planet or others.

Microbes don’t have easily fossilised hard parts like the bones or teeth of animals. Sometimes a geologist may be lucky and stumble across glassy silica deposits complete with entombed and immaculately preserved multi-billion-year-old microorganisms.

More commonly, we find some feature that at first glance could be a microfossil of a billion-year-old microscopic lifeform. But on closer inspection, we realise it is perhaps just be a “pseudofossil”, like a speck of microbe-shaped dirt or a lookalike mineral that grew in a crack in the rock. Just because it looks like a microbe doesn’t actually mean it’s a microbe.

To distinguish pseudofossils from real microfossils, geologists and astrobiologists look at the shape, structure and chemical composition of specimens. To know what we are looking for, we can compare these features to those from modern fossilised microbes in environments such as alkaline lakes, or from uncontroversial well-preserved examples from the older rock record. We can also conduct experiments to try to make microfossil-like objects without microbes and compare the results with purported ancient microfossil examples.

Sometimes microfossils are preserved as hair-like tubular filaments of organic carbon. Sometimes the organic carbon has long since disappeared and a microorganism-shaped hole in the rock is all that remains. And sometimes filaments of iron oxide have taken the shape of the organism. This last category includes some recent high-profile finds, including those from 4-billion-year-old rocks in Canada.

The new study shows that not all hollow tubular filaments made of iron oxide are biogenic microfossils. In an experimental process known as “chemical gardening”, researcher Sean McMahon created a pocket of acidic fluid enclosed within a membrane, sat in a highly alkaline carbonate or silicate solution.

As the outer solution flowed into the pocket, it would grow and eventually rupture, ejecting a jet of the internal fluid that is then rapidly enclosed by a new, tube-like membrane. This process ultimately created complex arrangements of hollow tubular filaments that can superficially resemble shapes of microbial lifeforms.

This study is another reminder that extraordinary claims, such as finding Earth’s oldest fossils or life on Mars, must be supported by extraordinary evidence. Finding a microfossil-like shape is no longer enough without supporting evidence that might include three-dimensional high-resolution microscopy, chemical analysis and a thorough consideration of the context and alternatives.

In his paper, McMahon indeed contends that the reported 4-billion-year-old iron oxide filaments are more likely to be the result of fluids chemically reacting with the ancient seafloor than Earth’s oldest fossil lifeforms.

But this research also doesn’t write off the possibility of true ancient iron oxide microfossils or their use as a model for evidence for life on other planets. It is notable that while the chemical experiments reproduced some microfossil-like shapes, they didn’t reproduce other shapes we could use to help identify microscopic life, such as septate (partitioned) filaments with cell walls.

Ultimately, finding the answers to these fundamental questions of when and where life existed requires a long journey, and we still don’t know if we are nearly there yet.