This Tsarist Era Battleship Served Until 1997—Sort Of 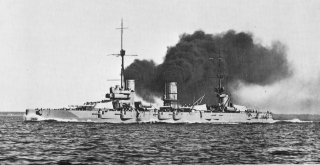 The Russian Gangut-class dreadnought Poltava didn’t exactly have a stellar record on the high seas. Completed after the outbreak of World War I, she and her three sister battleships were used to defend the mouth of the Gulf of Finland–yet as a German attack never came, the ships were largely untested in the First World War. Her restless crew participated in the general mutiny of the Baltic Fleet that occurred after the February Revolution in 1917, and most joined the Bolsheviks after the October Revolution.

A fire broke out in the ship’s boiler room, and that gutted most of her interior. Renamed the Frunze in honor of the Bolshevik military leader Mikhail Frunze, she was basically used as a source of spare parts for the other Gangut-class dreadnoughts. While there were plans to reconstruct the warship, the plan was abandoned by the mid-1930s and the warship was left as a barracks hulk in Leningrad, while she was later used as a base for smaller warships during the city’s nearly two and a half year siege in the Second World War.

However, what is largely forgotten is that in 1934 two of Poltava’s turrets had been sent to reinforce the Vladivostok Fortress fortifications on Russky Island in the Sea of Japan. Construction of the fortress had begun in 1889, but after Russia’s defeat in the Russo-Japanese War in 1905 it was substantially enhanced and by some accounts was among the most fortified of the early twentieth century fortresses. However, during the First World War, no active hostilities took place near the city. Instead, the port of Vladivostok served as a staging post for troops from allied and neutral countries. During the Russian Civil War, the White Army-allied Czech Legion took control of the city and declared it to be an Allied protectorate. After the Civil War, control of the port returned to the Bolsheviks, who sought to ensure that it wouldn’t fall into enemy hands again.

Fearing another possible war with the Japanese, the Soviets again fortified the positions on Russky Island near the bay of Novik. Two of those turrets were from the Poltava, while two of the fortification’s other 12-inch guns came come from a different Russian ship, the Emperor Alexander the 3rd, the last of the Imperatritsa Mariya-class dreadnoughts of the Imperial Russian Navy. The Voroshilov Battery served as a reliable defense of Russian Far Eastern borders until 1997, and today the facilities are home to a branch of the Military and History Pacific Fleet Museum.

Two of the Poltava’s other turrets were used after World War II to rebuild the Coast Defence Battery 30 (Maksim Gorky I Fortress) in Sevastopol, and as with the Voroshilov Battery, those remained in service until 1997. Because of the longevity of the use of the turrets, people sometimes joke that the Poltava was actually the longest-serving battleship in Russian naval history!