Tu-160: Russia's Largest, Heaviest, Fastest Bomber is Getting Even Tougher 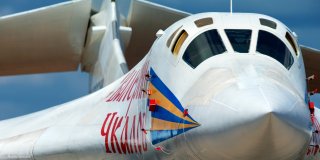 One of Russia’s most iconic bombers, the Tupolev Tu-160 White Swan is slated to receive a major redesign.

A source in Russia’s domestic aircraft-building industry told state news outlet TASS on Monday that development work is underway on the Tu-160M, a deep modernization of the Soviet-era Tu-160. “The aircraft is in a hangar readymade and fueled. Before the end of this year, the Tu-160M will surely make a run along the runway. A flight is not planned,” the source said. TASS’s source did not specify when the new bomber will take flight, adding that a timeline for state trials has not yet been determined.

Introduced in the 1980s, the Tu-160 strategic bomber (NATO reporting name Blackjack) has been described as the world’s largest, heaviest, and fastest bomber all at once. Reports first emerged in 2015 that Russia’s top military brass had greenlit the development of a deeply upgraded Tu-160 variant, dubbed the Tu-160M. The new plane largely retains the ubiquitous variable-sweep wing design of its predecessor, adding numerous improvements under the hood. The Tu-160’s NK-32 turbofan engines are widely acknowledged as the largest and most powerful engines ever fitted on a combat aircraft, capable of producing some 55,000 pounds of thrust in afterburner. The Tu-160M improves on its predecessor with the NK-32-02 engine, which reportedly boasts increased efficiency and reliability. A Tu-160M prototype, fitted with an NK-32-02 engine, performed its debut flight in November 2020. In keeping with other recent Russian aircraft modernization projects, the Tu-160M is slated to receive an upgraded avionics package including new navigation and radar equipment. The original White Swan relied entirely on its Mach 2+ speed to get to safety after deploying its payload; it is not clear what, if any, dedicated defense systems will be introduced by the Tu-160M.

As with the original White Swan, the Tu-160M is most accurately described as a heavy stand-off missile platform or missile-carrying bomber. The bomber’s arsenal encompasses a wide range of air-launched conventional and nuclear-capable cruise missiles from the Raduga Kh family, including the newer Kh-101 and Kh-102 stealthy cruise missiles. It is unclear if the Tu-160M will feature a larger payload than the 45,000kg capacity found on the original Tu-160.

The Tu-160 upgrade program appears to be phased across two distinct production cycles. The upcoming Tu-160M will reportedly be followed by the Tu-160M2, which will introduce a glass cockpit, stealth coating, next-generation cruise missiles, and a revamped countermeasures suite. The testing and delivery timelines for both the “M” and “M2” revisions are unclear as of the time of writing. All of the sixteen currently-serving Tu-160 bombers will be eligible to eventually receive the M2 upgrade package.