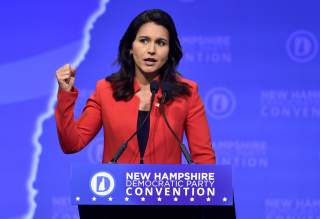 Biden has come under fire over allegations that he pressured Ukrainian officials to fire its top prosecutor who was looking into a Ukrainian gas company that Biden’s son Hunter Biden sat on the board of. The Hill’s Krystal Ball asked the Hawaii representative if she would allow the vice president’s son to sit on the board of a Ukrainian energy company if she were president, and the presidential candidate suggested she would not allow this.

“I think that would be a poor decision to make,” Gabbard said.

Co-host Saagar Enjeti also noted Friday that many Democratic presidential candidates “have been very reluctant to call this out as evidence of corruption” and asked Gabbard if the allegations against Joe Biden indicate corruption.

“I think the perception is certainly a concern,” Gabbard said. “I think we have to look at how we can root out the corruption of the abuse of power and influence within our government, and I think that there’s a lot of examples of it.”

The allegations against Joe Biden have resurfaced after an August whistleblower complaint accused President Donald Trump of asking Ukraine’s president to look into Joe Biden and his son over the issue. The House of Representatives launched an official impeachment inquiry into the president on Sept. 24 following the complaint.

Gabbard also added during the interview that she is still carefully considering boycotting the fourth Democratic presidential debate in October after announcing the idea on Twitter Thursday morning. She believes that the Democratic National Committee is rigging the election against voters in early states like Iowa and South Carolina.