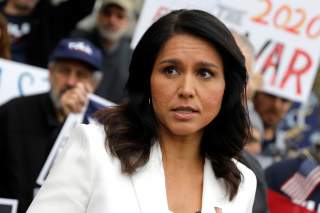 Rep. Tulsi Gabbard ripped into Hillary Clinton during an interview with Joe Rogan on Tuesday, criticizing Clinton for insinuating that she’s a Russian asset.

Democratic Hawaii Rep. Tulsi Gabbard continued to rip into Hillary Clinton on Tuesday for insinuating that the congresswoman could be a Russian asset.

Gabbard spoke about the issue with stand-up comedian Joe Rogan Tuesday on his video series, the “Joe Rogan Experience.” The two-and-a-half hour long podcast delved into Clinton’s suggestion that Gabbard could be a Russian asset in October.

“How does someone who was running for president and is one of the most prominent politicians in our country [Clinton], how do they get away with saying something that’s such a huge accusation with no information to back it up?” Rogan wondered.

The Hawaii congresswoman noted that Clinton was able to “get away with” making baseless insinuations about her “without any evidence … whatsoever.” She blamed the “media establishment” in part for allowing Clinton’s claims to go unchecked.

“When you look at the media establishment pushing a lot of the same narrative and a lot of the same message, then you can see how someone gets away with calling a sitting member of Congress, a candidate for president, a soldier actively serving in the National Guard, veteran of two Middle East deployments, basically a traitor of the country that I love and that I’m willing to lay my life down for,” Gabbard continued. “And to get away with it without any evidence or basis whatsoever.”

Clinton’s allegation, where she said Tulsi is “a favorite of the Russians” during an interview with CNN, received hardly any pushback from other Democrats, with the exception of a few fellow 2020 candidates. Gabbard also criticized media outlets for entertaining the suggestion that Gabbard is a Russian asset

Rogan said this was perhaps “the most bizarre thing” and Gabbard agreed. She noted that even if Clinton meant she was an “unwitting” Russian asset, she was essentially accusing her of being “too stupid” to know she was being used.

Gabbard also mentioned the dangers of allowing Clinton’s comments to go without pushback. She said it “sends a message” that if anyone were to challenge the political establishment, then they “can be smeared” too.

“The danger here of what she did and how the media responded and how almost every single other candidate for president refused to comment refused to denounce what she said … The fact that that was the response really has a chilling effect on our freedom of speech in this country,” Gabbard continued.

The lengthy interview also touched on her tumultuous relationship with competitor California Sen. Kamala Harris. Gabbard was asked if she ever is able to “hang out” with Harris backstage at the debates. The two have had many fights throughout the Democratic debates.

During the July debate, the Hawaii congresswoman demanded that the senator apologize to “people who suffered under your reign as prosecutor,” leading to a continued back-and-forth for months between the two.

“Yeah, I’m probably not at the top of her friend list,” Gabbard said, smiling. She noted that the two don’t speak during commercial breaks at the debates and often hardly even make eye contact.