Turkey’s Altay Tank: Will It Really Be Ready for War This Year? 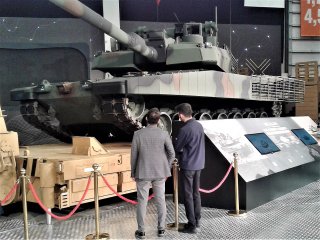 Turkey is forging ahead with ambitious plans to field a fourth-generation main battle tank (MBT).

Ankara’s interest in designing a next-generation MBT stems back to the 1990s. The project, spearheaded by Turkish automotive giant Otokar, sought to domestically produce a cutting-edge tank with extensive participation from local Turkish defense manufacturers.

The Altay tank is a patchwork design, stitched together from the contributions of numerous foreign and domestic partners. The main armament will be a modified Rheinmetall Rh-120 gun, license-produced by Turkish manufacturer MKEK. The control system and other sub-components will be produced by Turkish defense company Aselsan, while the armor system will come from Ankara-based defense contractor ROKESTAN. Turkey sought to power the Altay with the German RENK transmission and MTU engine, but the import talks fell through on the heels of geopolitical tensions between Berlin and Ankara sparked by Turkey’s intervention into the Syrian Civil War. The tank’s other specifications are fairly standard for a modern MBT, achieving a maximum speed of seventy kilometers per hour across an operational range of five hundred kilometers.

Following years of difficult negotiations, it appears that Turkey has finally ironed out a supply agreement with two South Korean companies—Doosan and S&T Dynamics. “These [deals] are the result of a strategic understanding between our companies and countries,” a Turkish source told Defense News, describing it as a “breakthrough agreement” without elaborating on its details. But the Altay project is not out of the woods yet—South Korea itself has faced significant challenges in mass-producing its domestic engines and transmissions, prompting its own K2 Black Panther fourth-generation MBT to be delayed by several years. The K2’s last two production batches combined a South Korean engine with a German transmission system, but export license restrictions will likely prevent the South Korean firms from using German components in the powerpacks they provide to Turkey.

As part of a prior $540 million technology transfer agreement between Ankara and Seoul, the Altay tank will share some design similarities with the K2—precise details remain elusive, but the Altay will apparently incorporate the K2’s turret design. Subsequent Altay batches were supposed to be produced with a French armor package, but this, too, is now in jeopardy following France’s protestations over Turkish military activity in the Mediterranean. The costs have not been confirmed, but early estimates have pegged the Altay price’s as high as $13.75 million—if accurate, the Turkish tank would easily prevail over the $8.5 million Black Panther for the title of most expensive service MBT in the world.

Despite being conceived and branded as such, the Altay is hardly a fully indigenous product. Between its licensed-produced components, powerpacks provided by South Korean companies, and design cues that were taken from South Korea’s K2 tank, significant aspects of the Altay’s design are wholly or partially of foreign origin. If anything, the opposite is true: not only is the Altay tank deeply reliant on foreign components, but that reliance has proven to be a major procurement liability for Turkey. Given its ongoing challenges in sourcing key components, it is difficult to see how the Altay can make it into service by Ankara’s optimistic projection of 2021.