Turkey Alone Cannot Save Its Allies in Libya's Civil War 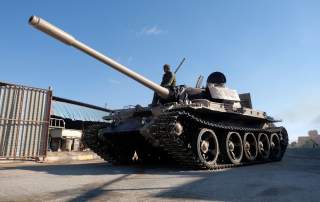 Squeezed by an army on the advance, Libya's Government of National Accord (GNA) has reached for a lifeline across the Mediterranean in Ankara, which is planning to send special forces, drones and other assistance to Tripoli. But while Turkey's military support will help keep the GNA afloat in Tripoli with an eye to ensuring it remains part of any future Libyan political system, it's unlikely to move the needle enough to halt the opposing Libyan National Army's (LNA) offensive on the city entirely. More to the point, LNA leader Khalifa Hifter's foreign backers are likely to respond to Turkey's move by increasing support for the field marshal — meaning that, in the long run, Ankara's involvement in Libya runs a high risk of encountering mission creep.

When Hifter launched his offensive in April 2019 on Tripoli, he intended to go for the GNA's jugular in Tripoli before opposing forces could mobilize in defense. Furthermore, he hoped that the militias in the northwestern region of Tripolitania would fracture and that some of them, such as the Madkhali Salafists, would join his cause against the GNA and other fighting groups. The field marshal's plans quickly went awry, as his opponents quickly mobilized with greater coordination than anticipated. (Some Madkhali Salafists in Sirte, however, did aid the LNA in its takeover of that city on Jan. 6.)

Prior to the LNA's offensive, Turkey's support for the GNA was modest. But as Hifter's offensive gained momentum and the GNA's Western-backers declined to provide significant military and political support for the internationally recognized government, Ankara stepped in with more training and equipment in May 2019, including Turkish-made Bayraktar TB2 UAVs and Kirpi 4x4 MRAP vehicles. Their arrival not only bolstered the anti-Hifter forces enough that they stopped the LNA's offensive, they even recaptured Gharyan, which had been the staging ground for Hifter's offensive in Tripoli, in June 2019.

Hifter and his backers decided not to yield to Turkey's greater involvement since freezing or completely abandoning the offensive on Tripoli risked upending his coalition. Countries like the United Arab Emirates and Egypt have invested in Hifter for years and feel they have no choice but to continue propping him up. Responding to Ankara's move, Abu Dhabi and Cairo increased their support for Hifter, transferring more funds, offering more air support and shipping more arms, including Pantsir surface-to-air missile systems and Wing Loong II UAVs — a move that has, in part, resulted in Libya's conflict becoming the world's first proxy battlefield for drones. In the meantime, Hifter has hired more Sudanese mercenaries to protect infrastructure, freeing up other forces. The LNA leader has also benefited greatly from the Russian Wagner Group, which deployed mercenaries to the front line in Tripoli in September 2019.

The redoubled support for Hifter gave his forces a qualitative edge. Wagner's mercenaries, for instance, are well-equipped and -trained, while the equipment the LNA has received is far more capable than that which the GNA has acquired from Turkey. The Wing Loong II UAV, for example, can carry eight times the weight of ordnance as the Bayraktar TB2. What's more, the Wing Loong II's range covers all of Libya, unlike the Bayraktar TB2, which can barely cover the hotspots of western Libya. Ultimately, the Wing Loong II drones, as well as suspected manned Emirati and Egyptian aircraft sorties, have allowed Hifter and his allies to pummel ground forces in Tripoli and Misrata and hit strategic air targets like the Mitiga airport in Tripoli and the Misrata War College.

Turkey to the GNA's Rescue?

As part of a November 2019 agreement between the GNA and Turkey that the latter's parliament ratified on Jan. 2, Ankara has agreed to send more equipment, including drones and combat vehicles, as well as to train an elite Libyan force that could quickly deploy to various areas. Turkey, however, is unlikely to send a large contingent of combat troops to Libya, preferring instead a detachment of special operations forces. In addition, Turkey could deploy the operators and technicians of the systems that it transfers to the country. Such deployments could make Hifter wary about continuing frequent airstrikes in areas in which Turkish troops are present, as Ankara would almost certainly retaliate if the LNA killed a Turkish soldier. (Naturally, the same goes for Russian private military contractors, who will have to calculate the risk of significant attacks on the front lines if Turkish advisers and special operations forces are in the area.)

Perhaps the most intriguing potential deployment would be from Turkish-backed Syrian rebels. Several media reports have suggested that Turkey is planning to send insurgents to Libya, including members of the Sultan Murad Division, Suqour al-Sham Brigades and Faylaq al-Sham. Some of these groups, such as Faylaq al-Sham, have ties to Libya that date back to 2012, when Libyan militias transferred arms and fighters to them. If true, the deployment of Syrian groups instead of Turkish combat troops would give Ankara an added layer of protection from the heat of the front-line battle, mirroring the Kremlin's use of Russian mercenaries.

The Limits to Ankara's Aid

But while Turkish support will allow the GNA to withstand Hifter's assault on Tripoli, it won't be enough to win the wider war. For one, the GNA's accord with Turkey has proven to be a blunder in terms of optics. Even ahead of the agreement on Turkish deployment, European support for the GNA had plummeted after the Tripoli-based government and Turkey ostensibly fixed their maritime border midway between them in the Mediterranean Sea, infuriating neighboring states like Cyprus, Egypt and Greece — the latter of which abandoned its neutrality in the Libyan conflict in favor of Hifter. More than that, the use of Syrian rebels, many of whom have suspected or overt connections to jihadist groups, as well as a checkered past regarding humans rights, is a propaganda coup for Hifter and his supporters like the United Arab Emirates, which have argued that Tripoli is infested with criminals and terrorists.

Moreover, Ankara has few options to dramatically increase the capabilities of its allies' air capabilities through the transfers of systems alone. Turkey's defense industry, while large, has not developed deployable systems that can rival the Wing Loong II or the Pantsir. Ankara could conduct attacks from the Turkish mainland with its F-16s, refueling them along the way with tankers, but doing so would embroil Turkey in Libya's conflict even further and increase the risk that it and the United Arab Emirates could target one another directly. As a result, Hifter and his allies will likely retain air superiority in Libya for the time being; and even if the offensive in Tripoli continues to stall due to increased Turkish support, they can continue to play the long game.

As it is, Abu Dhabi and Cairo already doubled down in their support for Hifter once before in 2019 in response to Turkey's backing for the GNA. And given the broader regional competition between Turkey and countries like the United Arab Emirates and Egypt, the latter two are likely to respond once more to Ankara's assistance to Tripoli.

One remaining question mark is the reaction of Russia, which could opt to increase or reduce its support for Hifter. With Turkey ultimately out to ensure that the GNA retains a high degree of influence in Libya's political system, Ankara and Moscow could well reprise their dialogue regarding Syria with talks on Libya, potentially paving the way for the withdrawal of the Wagner Group from the front line in Tripoli. But while such developments — along with Turkey's other efforts to prop up the GNA — likely mean that Libya's biggest city won't fall to the field marshal anytime soon, they're not nearly enough to win the country's nine-year-old war. And as the war drags on, so might the chances that Ankara finds it difficult to extract itself from a North African adventure.

Turkey's Help Won't Win Its Allies the Libyan War is republished with the permission of Stratfor Worldview, a geopolitical intelligence and advisory firm.