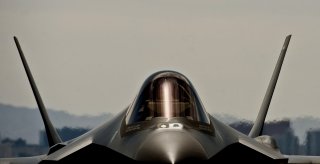 Despite being suspended from the F-35 program nearly a year ago, Turkey is still producing and delivering parts for the Joint Strike Fighter, according to a report from the Reuters News Agency, which quoted Turkish Defense Industry Director İsmail Demir.

Turkey was both a parts manufacturer and major buyer of the Lockheed Martin F-35.

The U.S. ally and NATO member had been suspended from the program over its purchase of the Russian-built S-400 anti-aircraft defense system last July. Turkey's involvement in the F-35 program was expected to "wind down" by March of this year. However, Pentagon officials had suggested there was the possibility that Turkey could rejoin the program in some form – provided it reversed course on the S-400 acquisition.

"The United States has been actively working with Turkey to provide air defense solutions to meet its legitimate air defense needs, and this administration has made multiple offers to move Turkey to the front of the line to receive the US Patriot air defense system," the White House statement added. "Turkey has been a longstanding and trusted partner and NATO ally for over 65 years, but accepting the S-400 undermines the commitments all NATO allies made to each other to move away from Russian systems."

Washington has further expressed fears that the anti-aircraft defense system could jeopardize the jets, but that the weapons platform is also incompatible with NATO defense systems

However, Turkey has maintained that Russia would have no access to the S-400s after all of the technical procedures are completed. The Turkish Defense Industry has described this as a "red line" concerning its ongoing cooperation with Russia, despite the fact that Ankara and Moscow have been establishing closer ties in recent years.

"Russian personnel will not have a free hand in accessing the S-400 batteries although training, maintenance and technical support are part of the procurement agreement [with Russia]. This is our red line. The Turkish Air Forces and Turkish companies will be those who have access to the systems," Demir, the chairman of the Presidency Defense Industries, told reporters at an online meeting in early April.

The S-400 systems were deployed in Turkey last year, and Russia was supposed to have activated them by last month, but Ankara announced the activation was delayed due to the coronavirus pandemic. The United States has also suggested that the purchase could result in sanctions against Turkey under U.S. legislation that is aimed at discouraging defense purchases from Moscow.

The F-35 is assembled at Lockheed Martin's mile+ long factory in Fort Worth, Texas, while final assembly and check is also performed at facilities in Cameri, Italy and Nagoya, Japan. The Joint Strike Figther it is made up of more than 300,000 individual parts that are produced by subcontractors throughout the United States, Canada, Australia, Israel as well as multiple European NATO allies including the UK, Italy, Norway and Denmark.