Turkey Could Make or Break the EU-Russian Relationship 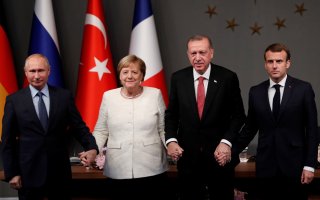 Angela Merkel, the longest-ruling German chancellor after Helmut Kohl and the de facto leader of the European Union, is leaving her office in September 2021. This political change will have its effects on many global issues varying from the refugee crises to climate change. As a key figure of the European continent and politics in the twenty-first century, Merkel’s absence on the international scene will configure new alliances and enmities, just as her presence did. However, Merkel took up the challenges of the last two decades, along with two strongmen in Europe’s neighborhood: Russia’s Vladimir Putin and Turkey’s Recep Tayyip Erdoğan.

The relations between the EU, Russia and Turkey have shaped the political and social atmosphere of the continent since the 2000s. While Russia and Turkey remained rivals during the first decade of the twenty-first century, they have developed a fragile military and economic partnership in the Middle East and the South Caucasus. After being a traditional ally of the West against Russian aggression for centuries, Turkey’s geopolitical shift has affected the resilience of the EU against recent crises. Many European capitals hesitated on Turkey’s political aspirations after the purchase of the Russian defense systems or alienation from NATO. However, Ankara’s actual achievements in the defense industry could restructure the EU’s military-industrial complex and stance against Moscow.

Turkey’s military presence in Libya, Nagorno-Karabakh, and Syria and ongoing military support for Ukraine could strengthen European defense in the next decade after Merkel. As a NATO member and traditional Western ally, Ankara’s place in the framework of NATO 2030 Vision could heavily contribute to Europe in rebalancing its relations with Russia. Furthermore, it seems that Ankara would change the course of the European military-industrial complex with its contracted sales to Czechia, Hungary, Latvia, and Poland. As an emerging partner of the Baltic countries, Turkey plans to expand its influence over Belarus, the only remaining Russian client state in Eastern Europe. Ankara thus could be a competitor to Moscow, and an important ally of the EU after Merkel.

On the other hand, the Kremlin watches Turkey’s moves in its bordering countries and client states. Defying growing Turkish military influence, a part of the Russian military-industrial complex, namely ZALA Aero Group, directly targets the Turkish Unmanned Combat Aerial Vehicle (UCAV), TB2, in its demos. Moscow attributes the importance to the weakening ties between Europe and Turkey. Heavily invested in the Eastern Mediterranean, Russia creates many security risks for the EU. Ankara and Moscow are trying to increase their impact over Eurosceptic governments of the EU, such as Hungary and Poland. Even before September 2021, Europe and its neighborhood have become an object of the great game between Russia and Turkey.

Nevertheless, the EU’s mutual concern with the United States and NATO leadership on human rights and democracy could prevent an immediate partnership with Turkey. From the refugee crisis to the reciprocal allegations of interference in internal affairs, the European-Turkish relationship has many issues to overcome. If Ankara and Brussels develop a mutual understanding, their partnership could also reshape the nature of European-Russian relations. Otherwise, Russo-Turkish cooperation in Europe’s Eastern neighborhood could threaten the unity and the strength of the Union after Merkel’s departure.

Oğul Tuna is a PhD student at the University of California, Irvine, and researcher at the Turkey-based Centre for Economics and Foreign Policy Studies. His research interests compass transnational movements in the former Soviet Union. Tuna is a columnist of Independent Turkish. Twitter: @sogultuna