Turkey Isn't Giving up on Its War in Turkey 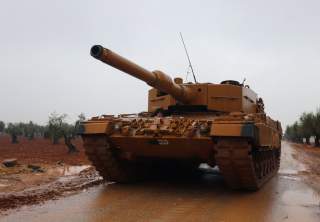 Key point: Ankara isn't giving up on ensuring it keeps the Kurds and refugees away from its borders. But in doing so, Turkey risks a war with Syria's ally Russia.

Moscow and Ankara’s long-standing alliance of convenience is set to face a trial by fire in northwestern Syria. A Russian- and Iranian-backed offensive by the Syrian government to retake Idlib appears poised to roll back Turkish influence in the area and send a new wave of refugees to Turkey, which is already hosting 3 million displaced Syrians. On Feb. 3, Syrian government shelling killed five Turkish soldiers in Idlib, prompting Turkey to respond with an array of strikes against Syrian government positions. The tit-for-tat strikes herald a new, dangerous phase for the conflict in Idlib as Syrian government forces push deeper into the province, leading Turkey to respond with the deployment of new forces directly in the path of the advancing troops.

For Turkey, it's a game of high-stakes military pressure to buy time for negotiations to ensure that no new surge of refugees will flood to Turkey and that its influence in northern Syria remains intact. Ankara is calculating that its strategy won't ignite a major military crisis with Moscow, but the more Syrian forces push into Idlib, the more likely it is that Turkey will send enough troops to the area that they end up in the direct line of fire. In digging in its heels in Idlib, Turkey ultimately risks starting a major military crisis with Russia that could quickly unravel their carefully cultivated relationship in Syria — and much further beyond.

Idlib hosts 4.5 million Syrians displaced from elsewhere in the country, and Turkey does not want to add to its already substantial burden of Syrian refugees. Feeding into Turkey's strategies against Syrian President Bashar al Assad, Ankara has supported a variety of Syrian rebel groups with equipment to battle Damascus and its Russian and Iranian allies while bringing its diplomatic weight to bear to negotiate with Russia to slow the assault.

But amid his drive to restore his authority over all of Syria, al Assad has found several effective strategies to steadily erode Turkey's position in Idlib province. For instance, the Astana Process granted Turkey the authority to establish 12 (now expanded to 18) observation posts in and around the province as part of de-escalation efforts with Russia, but Syria has simply circumvented the positions, cutting off three entirely. And although Turkey has attempted to use its ties with rebel forces to make further Syrian advances prohibitively costly, al Assad's forces have managed to steadily chip away at rebel-held territory, most recently grabbing towns on the M4 and M5 highways that connect the province to the Syrian heartland.

Given the gradual Syrian advance, Ankara has reason to prevent a refugee flood before it can happen, particularly as Turkey's fragile economy and its society's rising anti-Arab sentiment make it difficult for President Recep Tayyip Erdogan's government to welcome more displaced Syrians. At the same time, Turkey wishes to hold on to Idlib, as the province provides a buffer zone that allows it to maintain its influence in other areas of northern Syria; a quick victory for al Assad in the province would encourage Syrian forces to turn their attention to other areas of Turkish influence, including its buffer zones in the northeast, as well as its occupation zones in Afrin canton and northern Aleppo.

Push Back and Risk a Fight

In response to more Syrian advances, Turkey will continue deploying more forces to Idlib. Ankara will likely aim to prevent Damascus' troops from surrounding more Turkish observation posts and position Turkish forces to block further Syrian advances. Overall, Turkey will strive to increase the risks of further offensives for Syria and lean on Russia to pressure al Assad to slow or halt his attacks while the parties to the conflict negotiate the final status of the province. But by sending more Turkish forces into Idlib, Ankara may not succeed in immediately dissuading Syrian-led attacks — meaning Turkey could find itself embroiled in a fight with Syrian, Russian and/or Iranian forces.

Turkey has signaled that it will escalate its actions beyond mere tit-for-tat retaliation in a bid to raise the stakes for Russia, whose air and logistical support is critical for Syria to make ground advances. But such retaliation could claim more lives on both sides, creating deeper and deeper cycles of escalation and retribution. That, in turn, could ignite a military crisis in which Russia and Turkey would have no choice but to return to high-stakes negotiations and overhaul — if not completely jettison — the Astana Process that Turkey increasingly views as unsuccessful.

Even so, such negotiations would simply paper over Russian-Turkish differences, not resolve the status of Idlib. That, by contrast, will be a matter for negotiations between not just Turkey and Syria but also between the various factions, including al Qaeda's local offshoot, Hayat Tahrir al-Sham (HTS), and Damascus. But the low rate of success of negotiations between Damascus and the rebels, coupled with the HTS's own ideological commitment to maintaining the fight, suggests that such talks would likely fail and that al Assad would continue to resort to military force to restore control over Idlib. As a result, Turkey will eventually have a critical choice to make: either deepen its involvement in Idlib to give itself a greater say in any future negotiations or, less likely, find a means of extricating itself in a way that somehow prevents another refugee crisis.

Turkey is prepared to risk a military crisis with Russia to avoid another refugee crisis at home and prevent its Syria strategy from collapsing. In this, Ankara is betting that Moscow doesn't have the stomach for such a crisis but will instead push for discussions before one emerges. That, however, is a bet based on tactical brinkmanship with plenty of room for mistakes: The killing of large numbers of Turkish or Russian troops would readily precipitate an escalation — in which case neither side would be able to control just how far their conflagration spreads.

Turkey Digs In Its Heels in Idlib is republished with the permission of Stratfor Worldview, a geopolitical intelligence and advisory firm.