Turkey Might Lose the F-35 Thanks to Buying Russia's S-400 System. So What About Greece? 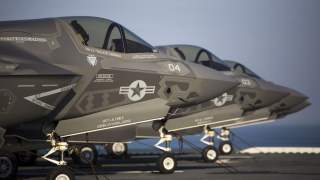 The Trump administration has signaled its intention to kick Turkey out of the F-35 program. White House press secretary Stephanie Grisham said, in a statement on Jul. 17 that the country’s involvement in the program has become “impossible.”

“Unfortunately, Turkey’s decision to purchase Russian S-400 air defense systems renders its continued involvement with the F-35 impossible. The F-35 cannot coexist with a Russian intelligence collection platform that will be used to learn about its advanced capabilities. The United States has been actively working with Turkey to provide air defense solutions to meet its legitimate air defense needs, and this Administration has made multiple offers to move Turkey to the front of the line to receive the U.S. PATRIOT air defense system. Turkey has been a longstanding and trusted partner and NATO Ally for over 65 years, but accepting the S-400 undermines the commitments all NATO Allies made to each other to move away from Russian systems. This will have detrimental impacts on Turkish interoperability with the Alliance. The United States still greatly values our strategic relationship with Turkey. As NATO Allies, our relationship is multi-layered, and not solely focused on the F-35. Our military-to-military relationship is strong, and we will continue to cooperate with Turkey extensively, mindful of constraints due to the presence of the S-400 system in Turkey.”

NATO’s secretary general Jens Stoltenberg reiterated that the S-400 system could not become part of alliance’s shared missile defense but Turkey has aircraft and radars that would remain part of the system.

As we have recently explained the U.S. threatened to end Turkey’s participation in the F-35 fighter  if Ankara didn’t scrap the Russian S-400 deal.

For this reason Turkey has been stockpiling parts for F-16s and other military equipment in anticipation of a possible U.S. sanction for acquiring the S-400 air defense system.

Now that Turkey is excluded from the F-35 program, it will look for alternatives, including Russian Su-57 jets, while trying to develop its own warplanes and ballistic missiles for domestic use and export, Turkish officials said.

If Turkey had to buy the Su-57 it would be the first country (outside Russia) to purchase the first Russian stealth fighter after India dropped out of Sukhoi/HAL Fifth Generation Fighter Aircraft (FGFA), known in India as the Perspective Multirole Fighter (PMF), which actually was a derivative project of the Sukhoi Su-57.

Noteworthy, Scramble Facebook News Magazine found out that while the U.S. cites concern over Ankara’s plans to purchase the Russian S-400 missile defense systems, older generation Russian surface to air missile systems are in use by other NATO countries: “earlier generation S-300 radars and short and medium-range missile had previously procured (and later modified) by Bulgaria, Greece and Slovakia and these are still in use by those countries. The S-300 is still seen as one of the world’s most powerful air defense systems.

Greece signed new agreements with Russia in 1999 and 2004 to purchase TOR-M1 and OSA AKM (SA-8B) medium- and low-altitude air defense systems. These Russian-made air defense systems are currently an integrated part of the air defense system of Greece — also a NATO nation– and have also been deployed in Greek Cyprus. The S-300 and Tor M1 have also radar systems that would pose a danger to NATO F-35 activities. Apparently that’s not a problem for the U.S. Maybe this has something to do with the fact that these systems are a little older, a little less advanced then the S-400 and that no Russian involvement (advisors, trainers, technicians) is present anymore with these systems.”