Turkey Is In NATO, But It Is No U.S. Ally 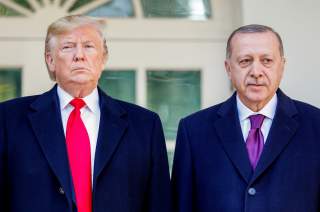 Key point: America's alliance with Turkey may be going through a realignment.

On October 22, U.S. Special Envoy Jim Jeffrey testified in Congress to discuss the Trump administration’s decision to abandon support for Syrian Kurds. While both Democrats and Republicans criticized Jeffrey’s policy and its disastrous results for the Kurds, nothing Jeffrey said should surprise. After all, when he spoke to reporters last December after a U.S.-Turkey Working Group Jeffrey reportedly said that U.S. cooperation with the Kurds was tactical and temporary, but that it was bilateral ties with Turkey that mattered. “We want to have cooperation with Turkey across the board on all Syrian issues.” This is a logic that Trump supporters in the foreign policy community embraced. Bush administration alum Michael Doran explained at a Hudson Institute panel, “We borrowed a Russian and Iranian proxy, and it was strategically stupid," Doran added. “Everyone knows we’re leaving sooner or later. Turkey is going to be there forever, and the Turks know this as well. So we have to work through them, largely on their terms.”

There is a fundamental problem with this argument, however. Turkey may once have been an important ally and partner, but if Jeffrey, Doran, and supporters of Trump’s strategy believe Turkey is an ally, then the word simply has no meaning at all.

Turkey says it is acting to defend itself from terror. But what Turkish officials tell their American counterparts is one thing; what they tell regional extremists is another. As Turkish forces poured across the border, Erdoğan tweeted in Arabic, “I kiss the foreheads of all the hero members of the Muhammadian army” entering Syria, not a statement typical NATO leaders say. He was not alone. Turkish Interior Minister Süleyman Soylu then told CNN Türk that Turkey would “make a deal with ISIS.” This may not be bluster. The only reason why the United States began its alliance with Syrian Kurds in the first place was because of overwhelming evidence that Turkey was passively if not actively support the Islamic State (ISIS). A Wikileaks dump of personal emails from Berat Albayrak, Erdoğan’s son-in-law and, at the time, Energy Minister, showed efforts to profit off of ISIS oil. At the battle for Kobane, Turkey allowed ISIS fighters to attempt to outflank Kurdish defenders and to attack from the Turkish side of the border. Captured passports and identity cards from ISIS fighters show most openly traversed Turkey’s territory. ISIS even maintained a de facto ambassador in Turkey to liaise with Turkey’s intelligence services. Turkey has incorporated Islamic State veterans into its proxy Free Syrian Army.

Turkey’s past actions in Syria raise serious concerns about its commitment to its neighbor’s territorial integrity. On January 20, 2018, Turkish forces entered Syria’s northwestern Afrin district, supposedly to combat terrorism. They forced tens of thousands of Kurds and Christians to flee. Those who remained had to exchange their Syrian identity cards for Turkish-issued ones. Kurds say women who remain cannot get an ID unless they wear conservative head coverings. Maps shown on Turkish television show northern Syria (and parts of Iraq, Greece, Bulgaria, and Armenia) incorporated into Turkey. Again, this is not just bluster. In the northern Syrian town of Jarabulus, Turkey opened a civilian post office sporting a Turkish flag.

The most tragic element in Turkey’s operation has been, despite Trump’s assurances, the impact on religious freedom and the local civilian population. Among Turkey’s first targets was Bisheriya, the largest Christian neighborhood in Qamishli city, setting houses alight and killing several civilians, even though there were no apparent Kurdish military positions in the area. Turkey also assaulted Amudeh, one of the few towns left in Syria with a Jewish population. This was no surprise: Since the Turkish assault began, more than 100,000 fled their homes. Many experts believe that figure will skyrocket.

No one should be surprised by Turkey’s actions in northern Syria. Its casus belli—to fight terrorism—was contrived. For all Turkish authorities speak about Kurdish terrorist groups in northern Syria, they and their supporters have been unable to show any recent attacks planned or executed from the towns and villages they now bombard.

Nor should Turkish behavior surprise since it has all been seen before. In 1974, Turkey invaded Cyprus, ostensibly to protect the island’s Turkish minority from a Greek junta seeking to annex Cyprus. Greeks overthrew that junta within weeks of Turkey’s invasion and yet, 45 years later, Turkey continues not only to occupy the northern third of the country, but now seeks to extract gas from its territorial water. When U.S. and European diplomats previously raised objections to Turkey’s behavior off Cyprus, Egemen Bağış—a top Erdoğan advisor—threatened to use the Turkish navy against American gas exploration ships operating under Cypriot contract. “This is what we have the navy for. We have trained our marines for this; we have equipped the navy for this. All options are on the table; anything can be done,” he said. As Turkey grows more aggressive, Cyprus has become perhaps the most dangerous flashpoint in Europe. As for Bağış, Erdoğan just rewarded him with an ambassadorship to the Czech Republic.

Nor should Turkey’s willingness to side with violent extremists over secularists and democrats be a surprise. As an Al Qaeda affiliate overran Mali in 2013 precipitating French intervention, Ahmet Kavaş, a theology professor whom Erdoğan’s appointed to be Turkey’s ambassador to Chad, tweeted that Al Qaeda was not actually a terrorist group. Erdoğan helped a man at the time designated by the UN as an Al Qaeda financer—a man with whom his son did business—evade Western sanctions.

Indeed, when it comes to terrorism, Erdoğan is at constant odds with Western countries. In 2006, it was Erdoğan who welcomed not only Hamas but also one of its most militant leaders to the Turkish parliament at a time when the United States and European Union demanded Hamas first foreswear terrorism before it could gain international diplomatic legitimacy. Erdoğan followed that meeting up by visiting Hamas leader Khaled Mashal in Syria. Two months before Boko Haram horrified the world by abducting 300 Nigerian school girls, leaked tapes exposed a conversation between Mustafa Varank, an advisor to Erdoğan, and Mehmet Karataş, the private secretary of the CEO of Turkish Airlines, in which the airline official allegedly said that he did not feel comfortable shipping weapons to Nigeria since it was unclear whether those weapons “are to kill Muslims or Christians.” Then, of course, there was Erdoğan’s reaction to Sudanese dictator Omar al-Bashir whose indictment on genocide charges for his actions in Darfur Erdoğan dismissed. “No Muslim could perpetrate a genocide,” Erdoğan declared.

Then there are Erdoğan’s efforts to help Iran to bypass international sanctions, Erdoğan’s diplomatic and military turn toward Russia, and Turkey’s threats to hold international organization (and therefore NATO) decision-making hostage over its 2010 flotilla spat with Israel. That Erdoğan action highlighted the danger poses to NATO. As a consensus-driven organization, Turkey can be Russia’s Trojan Horse—stymying any decision-making to paralyze the organization. And while Turkey critics argue that, in such a case, NATO can simply expel it, they are wrong: There is no formal mechanism within NATO to expel members.

Trump defends his greenlighting of Turkey’s invasion of northern Syria by attesting to the importance of Turkey as an ally. It is time he join the increasingly rare bipartisan consensus in Congress to ask whether if Turkey is an ally, then how would its actions be different if it were an adversary?

Michael Rubin is a resident scholar at the American Enterprise Institute (AEI). You can follow him on Twitter: @mrubin1971. This first appeared last month.