Turkey Is Prolonging The Bloodshed In Nagorno-Karabakh 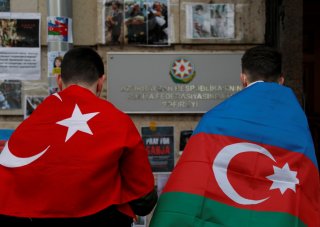 More than 1,000 people have been killed since a flare-up in violence in the Nagorno-Karabakh conflict on September 27. Hopes of ending nearly a month of bloodshed over this disputed territory appear dismal as regional actors continue to insert themselves in the conflict.

Nagorno-Karabakh is a breakaway region that belongs to Azerbaijan under international law but is governed and populated by ethnic Armenians. Although skirmishes have been common along the front lines of this territory through the years, this level of violence has not been seen since 1990, when a full-scale ethnic war erupted.

The re-ignition of Armenia and Azerbaijan’s thirty-two-year struggle over the Nagorno-Karabakh region has in part been fueled by Turkey’s regional ambitions. Ankara’s support for Baku is unsurprising, as both countries share close cultural ties and Turkish heritage. Turkey and Armenia, however, have a long history of conflict. Tensions date back to at least World War I when Armenians were massacred and driven out from Turkey during the fall of the Ottoman Empire, recognized by many today as the Armenian Genocide. Years of persecution and a tumultuous history have led to the Armenian military to defend the Nagorno-Karabakh region.

Turkey has used mercenaries, propaganda, military aid, and weapons exports to help drive Azerbaijan to war with Armenia. Ankara’s military exports to Azerbaijan have dramatically increased in the last year. According to export data, the sale of drones, ammunition, and other weapons rose to over $76 million the month before tensions escalated over the Nagorno-Karabakh region. Additionally, Azerbaijan acquired $123 million in other military and aviation technology from Turkey in early 2020. Ankara and Baku also held joint military training exercises between July 29 and August 5 of this year. Clearly, the two countries have been in close military coordination.

In addition to its increased weapons exports, Turkey used its state media apparatus to produce false reports of “threats” from Armenia prior to the flare-up in Nagorno-Karabakh. Mainstream media sources in Ankara touted headlines claiming Armenia had aided the transfer of PKK (Kurdistan Workers Party) terrorists from Syria and Iraq to the Nagorno-Karabakh region, a narrative that plays off Turkey’s long use of the “threat of PKK” to justify its militant operations around the globe.

Ankara’s contribution to the Azerbaijan-Armenia conflict is not limited to its weapons sales and military coordination with Baku. Evidence that Turkey is using Syrian rebels to fight its proxy wars is mounting. Turkish-backed militias have been deployed to Syria, Libya, and most recently Azerbaijan. In Libya, Russia and Turkey are using hired Syrian mercenaries as proxies to fight on opposing sides of the civil war. The majority of Syrian mercenaries in Libya were hired by Turkey, which supports militias fighting to remove President Bashar al-Assad from power in Syria. At the same time, Russian-linked security firms in Libya use Syrian units allied with Assad. Turkish President Recep Tayyip Erdogan uses these proxy fighters as a means to forcefully insert Ankara in regional conflicts.

Moreover, in the last year, Turkey has violated Israeli, Libyan, Iraqi, Syrian, and Greek sovereignty. The international community has condemned Turkey’s territorial encroachments on numerous occasions. A similar scenario is playing out in Nagorno-Karabakh today.

On October 21, Turkish Vice President Fuat Oktay pledged to provide full military support for Azerbaijan if necessary. Oktay has also denounced international efforts to quell the conflict’s escalation in Nagorno-Karabakh. The OSCE Minsk Group, comprised of the United States, France, and Russia, formed to help mediate the conflict. Turkish officials, however, claim this group is actively supporting Armenia. In a rebuke of Turkey, U.S. Secretary of State Mike Pompeo issued a statement highlighting Ankara’s malign involvement in the conflict. He noted Turkish-backed fighters are “providing resources to Azerbaijan, increasing the risk and firepower” that is only fleshing out the fighting.

As the violence continues to escalate, prospects for a peaceful resolution of the Nagorno-Karabakh conflict are dim. As long as Turkey continues its malign involvement in the struggle, cease-fires will be impossible to maintain and the death toll will only rise.

Maya Carlin is an Analyst at the Center for Security Policy. She is an MA candidate in Counterterrorism from IDC Herzliya in Israel.