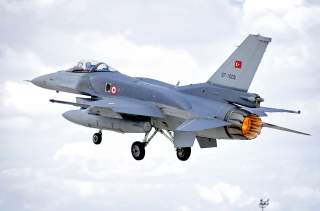 A Bloomberg report says Turkey has been stockpiling parts for F-16s and other military equipment in anticipation of a U.S. sanction for acquiring the Russian S-400 air defense system.

Two anonymous officials from Turkey who spoke to the news outlet refused to clarify on what types of spares were accumulated, how much was acquired and how long they can last.

Relations between the two countries deteriorated over the course of the Syrian civil war, when the U.S. armed a Kurdish militia that Turkey views as a terrorist group, and in the aftermath of a 2016 coup attempt against Erdogan that his government blames on a Turkish imam residing in the U.S.

“The first batch of S-400s will be delivered in a week or 10 days,” Haberturk newspaper cited him as saying in a report Monday. “I’ve clearly told this to Trump, Mr. Putin also said it.”

The U.S. argues that the pivot to Moscow could allow Russia to collect critical intelligence that would weaken NATO and compromise the American F-35 stealth fighter, which Turkish companies are helping to build. Yet while Congress is drawing up potential sanctions plans that at their harshest would cripple the Turkish economy, U.S. President Donald Trump has cast Turkey as a victim in the saga.

At the Group of 20 nations meeting in Japan on Saturday, the U.S. president said Erdogan was treated unfairly by the Obama administration when he sought to buy the U.S. built Patriot air-defense system. While the S-400 deal is “a problem,” the U.S. is “looking at different solutions,” he said.

Turkey in fact turned to Russia to address weaknesses in its air defense after failing to persuade the U.S. to share technology from its Patriot air-defense system as part of any acquisition deal.

A resolution submitted to the House of Representatives seeking sanctions against Turkey may hold a clue to the focus of Turkey’s parts-buying spree.

The U.S. has threatened to end Turkey’s participation in the F-35 fighter program by July 31 if Ankara doesn’t scrap the S-400 deal.

If Turkey is excluded from the F-35 program, it will look for alternatives, including Russian Su-57 jets, while trying to develop its own warplanes and ballistic missiles for domestic use and export, the Turkish officials said.

If Turkey had to buy the Su-57 it would be the first country (outside Russia) to buy the first Russian stealth fighter after India dropped out of Sukhoi/HAL Fifth Generation Fighter Aircraft (FGFA), known in India as the Perspective Multirole Fighter (PMF), which actually was a derivative project of the Sukhoi Su-57.

The Sukhoi Su-57 is a stealth, single-seat, twin-engine multirole fifth-generation fighter aircraft designed for air superiority and attack roles. The aircraft is the product of the PAK FA (literally “Prospective Airborne Complex of Frontline Aviation”) program. Sukhoi’s internal designation for the aircraft is T-50.

In fact, Russian state media claimed that the Su-57 will feature a maximum speed of 1,600 mph, slightly more than that of the F-22 Raptor, and that its missile range, based on the information available, also exceeds that of the F-22.