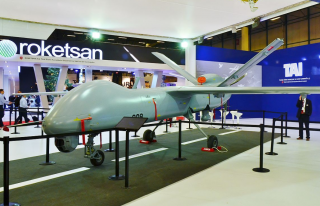 Key point: The success of the Anka-S and the development of the Anka-2 could position Turkey as a major player on the drone market

Many photos from Turkey’s Operation Spring Shield offensive against the Syrian Arab Army involve the Anka-S drone, their choice for frontline armed combat. In the operation, losses of Anka-S drones were confirmed, but Turkey claims that then type has been crucial to their success in the region. Sporting a V tail profile, sensor ball, and pusher-prop layout similar to the American MQ-1 Predator and MQ-9 Reaper drones, the Anka suggests a Western-influenced design.

But how was the Anka developed? What is its future?

Turkey began operating and experimenting with drones in the 1990s, starting its own development program and buying IAI Herons from Israel. “Anka” was the name under which a line of domestic medium-altitude UAVs was developed by Turkish Aerospace Industries (TAI). Herons began being used by Turkey in 2010. However, the Turkish desire to field armed combat drones was stymied by a U.S. ban on export of related technologies around 2012. Domestic production was then prioritized, with Anka development benefiting from this priority. Around the same time, the competing Bayraktar firm also received additional funding and support to kickstart the Turkish drone industry. Turkey also modified its Israeli Heron drones with domestic thermal cameras and sensor suites, which gave them valuable experience designing sensor packages for UAVs.

The first Ankas, designated Anka-A, began to take flight around 2012, in basic configuration. They were followed by the Anka-B around 2015, and finally the current Anka-S in 2018. Anka-Bs started to be used with MAM-L mini-missiles around 2017 by the Turkish Gendarmerie. The primary difference between Anka-S and prior versions is the use of a satellite datalink for additional jam resistance. Ankas and MAM-Ls were used against PKK cells inside Turkey prior to their combat debut in Syria.

The satellite link feature is why Anka-S drones were the primary armed drones in use during the Spring Shield operations in Syria, as the electronic warfare environment is very hostile in Syria. Anka-Ss served alongside other types, but their heavier and larger nature meant that they were preferred over competing Bayraktar UAVs for most strike missions. Both UAVs are capable of utilizing MAM-series of micro missiles, as well as other, larger munitions.

But TAI is already looking bigger. The company is working on the Anka-2, otherwise known as the Aksungur which is a far larger drone. Designed with two engines and a larger nose, the Aksungur is said to bring far better payload (including 230kg bombs), endurance, and sensors. TAI emphasizes that it wants to fit The Aksungur first flew in early 2019, and will probably enter service in 2020 or 2021.

The success of the Anka-S and the development of the Anka-2 could position Turkey as a major player on the drone market, as has service-tested UAVs as well as a family of micro-munitions fully integrated onto them. Only China offers a similar package to almost any customer, but nations have expressed discontent with Chinese UAV tech after using it in the field. Russia’s own Orion UAV has not yet entered service, and the United States is reticent to sell armed drone technology to anyone but their close allies.

Charlie Gao studied political and computer science at Grinnell College and is a frequent commentator on defense and national security issues. This article appeared earlier this year and is being republished due to reader interest.