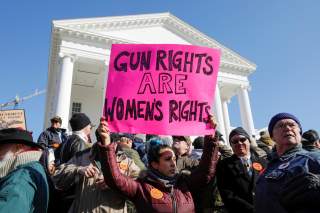 Many lawmakers around the country welcomed in the new year by pursuing legislation that would severely curtail the right of law-abiding citizens to keep and bear arms.

Meanwhile, law-abiding citizens began 2020 just as they ended 2019—by showing repeatedly just how instrumental that right is to the security of a free state.

According to almost every major study on the issue, Americans use their firearms defensively between 500,000 and 3 million times each year. Even if we assume the lower end of this range, it means an incredible number of times that Americans relied on the Second Amendment—not government getting there on time—to protect their inalienable rights.

During every month of last year, we highlighted some of the stories of average, everyday Americans who used their guns to protect their lives and livelihoods from criminals.

The first month of 2020 provided still more examples of citizens exercising their Second Amendment rights in defense of themselves and others. Here are 12:

As we noted in closing out 2019, it’s vital that Americans routinely hear these stories.

The “good guy with a gun” is not a myth but an integral part of American society, serving to protect individual liberty and increase public safety.

We all want safe communities, but our focus should be on doing the right thing instead of just doing “something.” The right thing certainly includes protecting the constitutional rights of law-abiding citizens, who regularly rely on those rights.

Amy Swearer is a senior legal policy analyst at the Meese Center for Legal and Judicial Studies at The Heritage Foundation.

Her article first appeared in The Daily Signal on February 21, 2020.

Image: A activist holds up a sign supporting gun rights for women during a rally inside the no-gun zone in front of the Virginia State Capitol building in Richmond, Virginia, U.S. January 20, 2020. REUTERS/Jonathan Drake