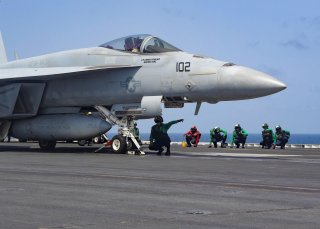 Recently, the United States Navy released photos of the USS Gerald R. Ford (CVN 78) and the USS John C. Stennis (CVN 74) transiting the Atlantic Ocean. This marked the first time that the new Ford-class aircraft carrier has operated with a Nimitz-class aircraft carrier together while underway. The photos provided the best visual comparisons of the two carrier classes to date—highlighting many of the significant improvements that the new $13 billion USS Gerald R. Ford has to offer.

CVN-78 is the lead ship of Navy’s new Ford-class of flattops, and while the class design uses the basic Nimitz­­-class hull form, it incorporates several improvements. These include features that permit the ship to generate more aircraft sorties per day, more electrical power for supporting ship systems, and upgrades that require several hundred fewer sailors than the older Nimitz-class. This could reduce the 50-year life-cycle operating and support (O&S) costs for each of the new Ford-class carriers by about $4 billion, according to Navy estimates.

The Drive noted that among the most significant visual differences is the placement of the island superstructures on the two carriers. While the Nimitz-class superstructure has evolved substantially over time and does vary from ship-to-ship, the placement and even size of the island superstructure is quite different on the Ford. It was moved back about 140 feet to provide more deck space and to enhance the operational tempo. The island is both shorter in length, but about 20 feet taller than that of previous carrier class.

The shape of the island was also modified to house the AN/SPY-3 and AN/SPY-4 active electronically scanned array (AESA) Dual Band Radar, which has six separate arrays that provide 360-degree coverage around the ship. The old spinning 3D and 2D radars—which have been staples on earlier carriers—have been eliminated.

The Ford-class of carriers have just three aircraft elevators instead of four, but the placement and larger size will enhance operations. In addition, the Navy has said that the larger flight deck will help the ship reach its goal of being able to execute 25 percent more sorties than its predecessor.

Not so easily seen in the photos are the Ford’s new Electromagnetic Aircraft Launch System (EMALS), which will be used to launch all of the carrier’s aircraft. This has replaced the traditional steam catapults that have been commonplace with U.S. Navy carriers for decades.

The new warship is also equipped with two newly-designed reactors that provide 250 percent more electrical capacity than previous carriers, and from those improvements, the ship will be able to load weapons and launch aircraft faster than ever before.

The USS Gerald R. Ford recently completed tests to prove that it can launch and recover jets, and also completed its first ordnance movement from a lower deck magazine.

While the ships operated together for that Navy photo-op, it was announced last week that the USS John C. Stennis would finally be returning home sometime this month, after remaining at sea following a deployment to the Middle East the past few months to protect the crew from exposure to the novel coronavirus. In April, the Navy announced that the USS John C. Stennis Carrier Strike Group would remain at sea off the East Coast of the United States to keep the crew healthy and to remain combat-ready to take on missions if needed.

That move was made after the USS Theodore Roosevelt (CVN 71) was sidelined for almost two months in Guam after a significant portion of her crew was infected with COVID-19.