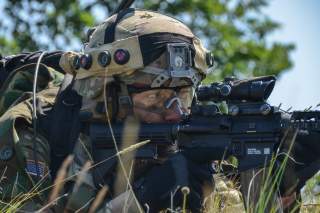 Efforts to reach both men for comment on Wednesday were unsuccessful.

Two commanders involved with the deadly 2017 Niger ambush are reportedly still eligible for promotion, and the Pentagon has no problem with that.

U.S. Africa Command's investigation into the incident found serious problems with how their team was trained before and after arriving in theater and how the mission was planned. Their commanders also did not adequately work with French and Nigerien forces for casualty evacuation planning prior to the mission, according to a redacted copy of the investigation, which was provided to Task & Purpose.

The mission itself kept changing, and when the team asked to return to base, they were told to continue to their objective even though commanders had not reassessed the risks they faced given that the team had no plan to evacuate wounded under fire; no quick reaction forces were assigned to them; the team had little rest in the past 24 hours; and they would be operating near the border with Mali, the investigation found.

Still, Politico has reported that Col. Brad Moses, who was commander of 3rd Special Forces Group in Africa during the deadly incident, is still eligible for selection to brigadier general, though he has not yet been nominated. Lt. Col. David Painter, who reportedly denied the team's request to return to base, has also been selected to advance to colonel (The Army confirmed to Task & Purpose that Painter is a colonel-select).

Efforts to reach both men for comment on Wednesday were unsuccessful.

Defense officials appeared as bewildered as deer caught in headlights when reporters asked them on Wednesday why Moses and Painter were not punished.

"The department is absolutely confident after two investigations and three reviews that accountability has been rendered in this case," said Owen West, assistant secretary of defense for special operations.

A total of nine "disciplinary actions" have been taken as a result of the Niger ambush, said West, who did not name the personnel who were punished administratively. Politico has identified one of the commanders disciplined as Air Force Maj. Gen. Marcus Hicks, head of Special Operations Command Africa, who is set to retire soon.

Army Gen. Raymond "Tony" Thomas III, former head of U.S. Special Operations Command, found there was "no criminal negligence" committed by anyone involved with the mission, a defense official said.

"There was poor judgment and tactical leadership," the defense official said. "We hold people accountable, but the UCMJ was not the appropriate method for this type of accountability. There's a non-judicial process for holding people accountable"

However, Rep. Ruben Gallego (D-Ariz.) slammed the Defense Department on Wednesday for its handling of the Niger ambush aftermath. The Marine veteran accused the Pentagon of putting all the blame for what went wrong on junior officers and enlisted service members.

"Nearly two years later, we are still waiting for answers," Gallego said in a statement. "The Pentagon has refused to comply with the mandate to provide Congress with a comprehensive account of what went wrong and the lessons learned, and to provide the families of those lost with any semblance of closure."One thing is clear: mistakes were made that cost these men's lives," he continued.

"Their families – and the American public – deserve clear answers about what happened, who will be held accountable, and what will be done to prevent this from ever happening again."