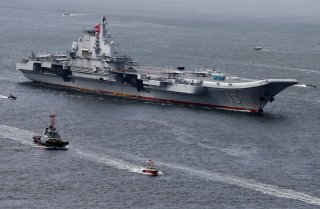 A Chinese newspaper essay says a new U.S.-China Cold War is not “inevitable” and accuses the U.S. of shifting away from engagement toward “all-out strategic competition.” Meanwhile, at the same time, China is reportedly sending two aircraft carriers for war games to Northern portions of the South China Sea, sparking continued concerns about threats to Taiwan.

The two messages appear somewhat at odds, because state-owned Chinese media is writing about a need to decrease tensions while China concurrently sends two massive warships into disputed, high-tension areas in preparation for military exercises.

A May 25 editorial in China’s People’s Online Daily takes up the issue of fast-escalating U.S.-China tensions surrounding the coronavirus pandemic. The essay, titled “A New Cold War between China, U.S., far from Inevitable,” states “competition is and always will be a part of international relations and therefore, by extension, a part of China-US relations, but the shift from engagement with China to all-out strategic competition sets the stage for a dangerous future.”

However, the accusatory tone in the essay, taken within a broader context of appearing to favor improved relations between the U.S. and China, appears to conflict with a report in The Daily Mail stating that China is sending its Liaoning and Shandong carriers into areas of the South China Sea for drills. The move, the Daily Mail story suggests, heightens ongoing concerns among many that China may be considering an invasion of Taiwan…. should tensions escalate. The two carriers are, according to the report, currently in Bohai Bay in the Yellow Sea in preparation for War Game drills.

“Taiwan, meanwhile, has complained of increased Chinese military harassment since the coronavirus pandemic began, with fighter jets and naval vessels regularly approaching the island on drills China has described as routine,” the paper states.

Longstanding tensions regarding deployments, weapons placement and maritime navigational routes surrounding the South China Sea appear to have slightly faded from view, perhaps in part due to other pressing events such as the coronavirus pandemic. However, territorial disputes and U.S.-China disagreements over China’s phony island building, called “land reclamation” in the region are far from being resolved.

At several points, Chinese maneuvers in the South China Sea area, coupled with visible moves to place weapons and war assets in the region, have prompted the U.S. to conduct “Freedom of Navigation” operations and sail within the 12 mile territorial boundaries of areas claimed by China. These areas claimed by China, however, are part of a large volume of Spratly Island territories spanning throughout the South China Sea, areas home to a long history of territorial disputes among Southeast Asian nations. It certainly seems conceivable, if not likely, the South China Sea tensions may again emerge as prominent and pressing concerns being entertained by U.S. leaders.