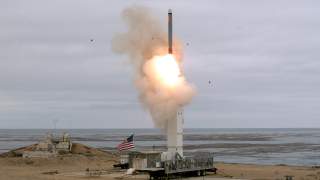 The Department of Defense announced this week that the U.S. Navy has deployed a low-yield submarine-launched ballistic missile (SLBM) nuclear warhead. This deployment, which aims to deter Russia’s first-use of a low-yield nuclear weapon, represents an important but insufficient step to deter Russian aggression.

According to the Pentagon, “there is a large and growing disparity in the nonstrategic nuclear weapons (NSNW) fielded by the United States and the Russian Federation.” In fact, Moscow possesses a stockpile of up to 2,000 active NSNWs that it can employ using ships, planes, and ground forces. Underscoring Washington’s concerns, Moscow’s statements and military exercises demonstrate that it has developed a war-fighting doctrine that emphasizes the first-use of low-yield tactical nuclear strikes.

Moscow believes the size and variety of its NSNWs “provide a coercive advantage in crises and at lower levels of conflict,” according to the 2018 U.S. Nuclear Posture Review (NPR). This perception could increase the chances that Moscow employs low-yield nuclear weapons. Correcting this perception, the NPR notes, represents a “strategic imperative” for the United States.

Consequently, the Trump administration requested funding for fiscal year (FY) 2020 to deploy a low-yield SLBM, the W76-2. Despite opposition along party lines in the House of Representatives, the final FY 2020 National Defense Authorization Act (NDAA) permitted the W76-2 deployment to proceed. Republican and Democrat senators voted to pass the final NDAA by a vote of 86-8.

Under Secretary of Defense for Policy John Rood issued a statement on Tuesday announcing the deployment. The deployment “provides the United States a prompt, more survivable low-yield strategic weapon.” In publicly doing so, Rood argues that the U.S. “demonstrates to potential adversaries that there is no advantage to limited nuclear employment because the United States can credibly and decisively respond to any threat scenario.”

While the deployment of the low-yield SLBM warhead strengthens U.S. nuclear deterrence, more must be done.

Indeed, the 2018 NPR said that the deployment of the low-yield SLBM warhead represented a “near-term” step as the Department of Defense develops a modern nuclear-armed sea-launched cruise missile (SLCM-N).

Washington certainly does not need to build an NSNW arsenal identical to Moscow’s. But the deployment of a SLCM-N would provide the United States a complementary capability distinct from the W76-2. The SLCM-N would complicate Russian defense planning and further strengthen deterrence against a potential first-use of low-yield nuclear weapons in a regional crisis.

The deployment of the SLCM-N would prevent Moscow from accruing significant military advantage based on its deployment of ground-launched cruise missiles in longstanding violation of its obligations under the now-defunct Intermediate-Range Nuclear Forces Treaty. The deployment of a SLCM-N would also not require a new nuclear warhead or nuclear testing, and it would not violate any U.S. treaty commitments.

Fielding the SLCM-N could increase Russian President Vladimir Putin’s incentive to come to the nuclear weapons negotiating table in good faith. If Moscow refuses to negotiate in good faith, the United States will need the SLCM-N to deter Russian aggression.

The deployment of such a capability has enjoyed some bipartisan support, including from James Miller, former President Barrack Obama’s undersecretary of defense for policy.

The best way to protect American interests and deter Moscow’s use of low-yield nuclear weapons is to make clear to Putin that Washington has appropriate means to respond. That is exactly what the dual deployment of the low-yield SLBM warhead and SLCM-N would provide.

Bradley Bowman is senior director of the Center on Military and Political Power (CMPP) at the Foundation for Defense of Democracies (FDD), where Major Liane Zivitski works as a visiting military analyst. For more analysis from Brad, Liane, and CMPP, please subscribe HERE. Follow Brad on Twitter at @Brad_L_Bowman. Follow FDD on Twitter @FDD and @FDD_CMPP. FDD is a Washington, DC-based, nonpartisan research institute focusing on national security and foreign policy.