Two Senators Want Americans To Know: What's Hidden in the Classified Footnotes of the IG Report? 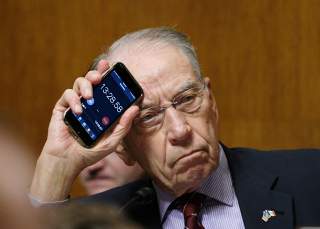 The Republican chairmen of two Senate committees asked Justice Department Inspector General Michael Horowitz on Tuesday to declassify information in four footnotes in the report on the FBI’s investigation of the Trump campaign.

The senators said the redacted information is “essential” for the public to fully understand what went wrong in the probe.

“The American people have a right to know what is contained within these four footnotes and, without that knowledge, they will not have a full picture as to what happened during the Crossfire Hurricane investigation,” Sens. Chuck Grassley and Ron Johnson wrote to Horowitz.

“This classified information is significant not only because it contradicts key statements in a section of the report, but also because it provides insight essential for an accurate evaluation of the entire investigation,” they continued.

The letter stirs mystery over what is behind the redactions and suggests that the report is even more damning for the FBI than already known.

The report said FBI agents failed to disclose information that undercut the bureau’s theory that Page was working as a Russian agent and that he conspired with the Kremlin to influence the 2016 election. FBI agents also failed to inform the FISC that the main source for former British spy Christopher Steele disputed information in a dossier that the bureau cited in its warrant applications to the FISC.

The errors and omissions were so egregious that the FISC issued a public order reprimanding the FBI.

“The FBI’s handling of the Carter Page applications, as portrayed in the [Office of Inspector General] report, was antithetical to the heightened duty of candor described above,” Judge Rosemary Collyer, who then presided over the FISC, wrote in a letter on Dec. 17.

“The frequency with which representations made by FBI personnel turned out to be unsupported or contradicted by information in their possession, and with which they withheld information detrimental to their case, calls into question whether information contained in other FBI applications is reliable,” she added.

Justice Department notified the FISC on Jan. 7 that two of the four wiretap applications were “not valid.”

Grassley and Johnson do not identify the four footnotes in question, and a spokesman for Grassley did not respond to a request for additional information about the footnotes.

Dozens of the 535 footnotes in the report contain at least some redactions, though only three are blacked out completely.

One of the footnotes refers to a section of the report about Steele’s working relationship with Oleg Deripaska, a Russian oligarch with close ties to Russian President Vladimir Putin. Republicans have questioned whether Steele’s relationship with a Kremlin insider influenced his investigation of possible collusion between Russia and the Trump campaign.

Another footnote refers to a separate Steele sub-source who told FBI agents that information attributed to them in the dossier was “exaggerated.”