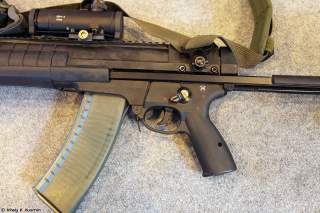 Key Point: Just how dangerous is it?

One of the primary differences in infantry training between NATO countries and the former Warsaw Pact was the use of automatic fire. While NATO countries train their infantry to almost always use semi-automatic fire to engage targets, the Warsaw Pact countries trained their infantry to make use of fully-automatic fire on the assault, in short, controlled three-round bursts. This was a result of the AK originally entering service to replace the PPSh as a weapon to deliver fully automatic fire. As a result of this doctrine, Russian small-arms designers put significant effort into finding ways of making fully automatic fire with intermediate rifle cartridges more controllable and accurate. One of the more interesting developments of that effort was the invention of the balanced action recoil system, implemented in some recent prototypes that may replace the current issue AK-74M.

While the Soviet Union had many designers and plants that tinkered with balanced action rifles, the most successful designs were created by the Kovrov Mechanical Plant—otherwise known as ZiD (Zavod imeni Degtyaryova). This plant has had a long heritage of creating automatic weapons: during WWII it produced the famous Degtyarev machine gun, as well as the Shpagin (PPSh) submachine gun. Kovrov got its first real chance to pitch a balanced action gun in the Soviet rifle trials of the early 1970s. After seeing the effectiveness of the M16 in Vietnam, the Soviet military realized they needed a smaller, more lightweight cartridge to match the effectiveness of the new 5.56mm round. In response, they drew up the 5.45x39 round, which shot a lighter bullet flatter and faster than the earlier 7.62x39 round used in the AK and AKM. But a rifle was still needed to fire this new round. The set of requirements for the new rifle was laid out in 1965: the new rifle was expected to perform at least 1.5 times better than the AKM by increasing the terminal effects of the bullets, as well as reducing recoil to reduce the dispersion of fire in bursts.

ZiD’s answer to this trial was the Konstantinova Koksharova SA-006 rifle. Designed in 1970, it decreases recoil by linking the gas piston to another metal weight of the same mass. As the gun’s gas piston is driven back by the gas being tapped from the barrel during the firing of a cartridge, the other metal weight is driven forwards by gears connected to the gas piston. This evens out the impulse of the gas piston being driven back, “balancing” the action and resulting in reduced recoil. This mechanism proved to be very effective in trials in the early 1970s, the SA-006 was the primary competitor to Kalashnikov’s A-3 rifle, which was simply an adoption of the same AK action to a new cartridge. The SA-006 outperformed the conventional Kalashnikov design in accuracy, especially in unsupported and off-hand positions. However it suffered from a lack of maturity in the design, the receiver top cover was prone to pop open during firing, and pulling the charging handle required significantly greater effort than the AK rifles. As such, the A-3 was developed into the AK-74 and adopted. Some have said that this is because the Soviets wanted to have an answer to the M16 in service as soon as possible, without waiting for the more advanced designs to mature.

However, this was far from the end of the line for the balanced action. Balanced action rifles returned to compete in the 1980’s “Abakan” program, that attempted to improve the accuracy and penetration of the AK-74. Kovrov entered this competition with their new AEK-971 rifle designed by Sergey Korshakov. It used the same concept as the SA-006, with a second weight counterbalancing the recoil force of the bolt. In the end, it too was passed over in competition: the AN-94 won the Abakan competition and was nominally brought into service. Despite this, in the field the AN-94 proved to be a failure. Operators have expressed preference for the AEK-971 over the AN-94 and AK-74M rifles, so Kovrov continued to produce the AEK-971 and AEK-973 (a 7.62x39 version of the AEK-971) in small numbers. Izhevsk Mechanical Plant (now Kalashnikov Concern) also incorporated the balanced action into their Kalashnikov rifles in the later versions of the AK-100 series. The AK-107, AK-108 and AK-109 are versions of the traditional AK, in various calibers and lengths that use balanced actions to reduce recoil. Kovrov has also recently modernized the AEK-971 recently for the “Ratnik” program. The new rifle is called the A545 in 5.45x39 and the A762 in 7.62x39. They have redesigned the externals by adding a telescoping as opposed to folding stock, changed the fire selector from a traditional AK style safety/selector to a modern ambidextrous thumb selector that resembles H&K weapons, and replaced the old AK leaf sight with a rotary drum with apertures. The traditional AK side rail has also been replaced with a Picatinny rail on the top of the receiver. In doing so, Kovrov has addressed many common complaints about the AK-74M: the short sight radius and imprecise battle sights, the lack of a thumb safety, and the lack of provision for modern optics. Given that the A545 has been reported to pass field trials (alongside the AK12), we may finally see a balanced action rifle adopted and mass-produced in the near future.

Details of the SA-006 and AEK-971’s development were taken from “Istoriya Russkovo Avtomata” (History of the Russian Assault Rifle) by S. B. Monetchikov.

This piece first appeared in late 2017. It is being republished due to reader interest.