The U.K. Royal Air Force Might Have F-35s (But Something Is Seriously Wrong) 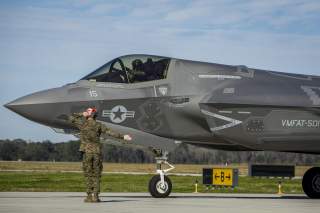 The U.K. Royal Air Force has too few aerial tankers, and no easy way of adding more, at precisely the moment it needs a large, flexible tanker fleet.

A contract that observers have described as short-sighted and too costly is the major reason the British flying branch is suffering an aerial-refueling shortage.

The RAF, in theory, has access to 14 Airbus A330 Voyager tanker-transports under the auspices of the service’s Future Strategic Tanker Aircraft program. In practice, just a few A330s are available on short notice for wartime tasks, Kelvin Curnow wrote for U.K. Defense Journal.

AirTanker, a consortium of Cobham, EADS, Rolls-Royce, Thales U.K. and VT Group, operates the Voyagers on the RAF’s behalf. The deal costs the RAF $490 million a year and expires in 2035.

The U.K. government’s contract with AirTanker makes the consortium the sole provider of aerial-refueling for the British military. The RAF isn’t allowed to acquire tankers from any other source or even to modify existing planes to double as tankers.

The consortium manages all 14 Voyagers. Five are in reserve. One exclusively makes supply runs to The Falklands. Another supports British warplanes in the Middle East. A third operational Voyager must remain in the United Kingdom to support fighters flying domestic air-defense missions.

“This leaves spare capacity of just five Voyagers to meet all other refuelling needs,” Curnow wrote. “The fact is that there are inadequate numbers of tanker aircraft available to the RAF on a day-to-day basis is palpable, particularly given the heightened tensions between NATO and Russia, the ongoing conflicts in the Middle East and escalating Chinese hegemony in the South China Sea.”

“The lack of numbers is further exacerbated because the Voyagers are also employed on transport tasks including one which has been modified to VIP configuration.”

As far as tankers are concerned, there are some major issues facing the RAF, Curnow explained. First, the Voyager is the only version of the A330 MRTT that doesn’t have a boom, which allows a tanker to refuel warplanes that have probe-and-receptacle-style refueling systems.

The RAF also has considered buying conventional-takeoff F-35A stealth fighters to complement its vertical-landing F-35Bs. The F-35A, unlike the F-35B, also refuels in mid-air via a receptacle. If the RAF does buy the F-35A, it will have no way of refueling the type in mid-air unless it modifies the Voyagers with a boom.

Fortunately, “the first issue is easily resolvable,” Curnow wrote. “The then-Deputy Commander of Operations Air Marshal Greg Bagwell said at the FIDAE air show in Santiago, Chile in March 2016 that the operational case for equipping at least some of the U.K.’s Voyagers with the [Airbus boom system] had already been accepted.

But there are other problems. The Voyager flies too fast to refuel “the growing number” of RAF and Royal Navy helicopters that can take on fuel via the basket-and-probe refueling system, Curnow pointed out.

The RAF has dozens of slow-flying transports including C-130Js and A400Ms that could, in theory, deploy basket-and-probe-style refueling gear in order to function as tankers for helicopters.

But there’s a catch. “The exclusivity clause prevents the RAF using its own aircraft” as tankers, Curnow wrote. Legally, only AirTanker can operate tankers for the British armed forces. And AirTanker flies only Voyagers.

“The absurdity of the RAF possessing 22 Airbus A400M Atlas aircraft which are delivered equipped with fuel lines to attachment points for under-wing refueling pods and yet not being able to utilize that capability, highlights again the shortcomings of the AirTanker contract,” Curnow wrote.

“The AirTanker contract could be described as a train wreck,” Curnow added. “The aircraft were contracted at a bloated price and in their current configuration cannot meet the needs of the RAF or [Royal Navy], let alone future requirements.”