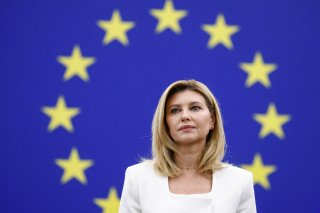 Ukraine’s First Lady, Olena Zelenska, told CBS News’ 60 Minutes in an interview broadcast Sunday evening that hundreds of children have been killed due to continuous bombings of hospitals and schools in her country.

The forty-four-year-old Zelenska, who has been married to her husband, President Volodymyr Zelenskyy, for nineteen years, added that since the war began in late February, nearly 500 hospitals and clinics and 150 schools have been destroyed by the bombing. Roughly 900 schools have been damaged.

“Half [our] families are separated” … and “people are afraid to leave their [homes] because of shelling. They're afraid even to try to evacuate. We have thousands of dead. Hundreds of children are dead,” she said via a translator.

“Around 3,500 schools will operate online only, because schools cannot receive students and because their parents are afraid to send their children to school. [Ukraine's] children went to school this year … and the first thing they learn [is] where the bomb shelter is, how to get there and what to do in case a missile strikes. We will fight. We will not give our children up. I don't know how we can forgive this. I don't think we will,” she continued.

When she first heard about the bombings of two schools, a library, a hospital, and a soccer stadium in Chernihiv, Zelenska called it an act of terrorism.

“[The Russians] try to frighten people to make them run, to have towns and villages empty so they can occupy these territories,” she said.

“Definitely, terrorism. The war is being waged using modern means, but from the moral and ethical point of view, [it's] the Middle Ages,” she added.

Zelenska noted that after the Russians severed communications with occupied territories, Ukrainians dropped messages in the Dnipro River hoping to reach them. On Friday, Russian president Vladimir Putin announced that Russia was moving to annex the occupied territories despite strong international condemnation.

“We really hope that our love letters were received by someone there and that they hear us. I truly hope [our people] will endure,” she said. “We will never give [up our people]. And by the way, [there is this idea of giving up territory in some kind of negotiation.] Our people are there. We will never betray them.”

When asked if that isn’t negotiable in the view of Ukraine’s government, she replied:

“I really don't want to express political opinions. That's not my role,” she said.

“But imagine a situation where you've been attacked by bandits. They are threatening you, killing your children. And someone [suggests] maybe, it would be better to negotiate? [That] is impossible now. This is just my opinion as a citizen of Ukraine,” she concluded.