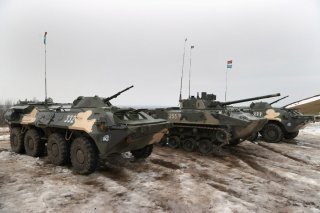 Ukraine faced the largest cyber attack in the country’s history, officials said this week. Secretary of Defense Lloyd Austin said on Thursday that “the intelligence community continues to assess what happened there.”

Austin said during a press conference that he could not confirm that Russia was behind the cyber attack, but said it was consistent with what was expected from Vladimir Putin.

“This is a play taken out of his playbook,” Austin said. “You know, we would expect to see, before any attack we'd expect to see cyber attacks, false-flag activities and a number of others -- increasing rhetoric in the information space, and we're beginning to see more and more of that.”

Austin also said that the United States would respond to any cyber attack on NATO.

Cyber attacks could strike at vital targets in Europe or even within the United States. An obvious option would be to attack electrical grids to blind Ukrainian or NATO forces. A distributed denial of service (DDoS) attack could shut down computer networks and communications. Cyber attacks could also be carried out against satellites or specific weapons systems.

For instance, the US Air Force has for several years now been operating a special office called Cyber Resilience Office of Weapons Systems (CROWS). CROWS tests, hacks, and seeks to penetrate existing weapons systems to identify and correct potential vulnerabilities.

Many weapons developers have said the Russian invasion of Crimea in 2014 was a wake-up call for the United States. There are growing amounts of cyber components to electronic warfare information systems, targeting technologies, and data transmission, an evolving phenomenon that has continued to drive the Pentagon’s push to accelerate cybersecurity technologies.

The U.S. Air Force has recently stood up special “Cyber Squadrons” tasked with training the force on cyber hygiene and researching new cyber security applications. For example, one technique is to use computer automation to replicate the behavior of a human user online to lure and identify a potential intruder. Other innovations include Navy efforts to use technology to identify the presence of malware buried into encrypted communications.