Ukraine Is Facing a Tough Path Towards Peace with Russia 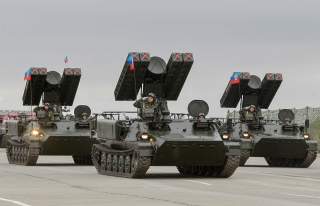 Key point: Zelenskiy will need the Ukrainian people’s buy-in as well as that of the Donbass and Moscow.

Developments continue to muddy progress toward resuming the so-called Normandy Format to try to settle the conflict in Ukraine. Representatives of the separatist Luhansk People's Republic informed observers with the Organization for Security and Co-operation in Europe that the group would be ready to begin withdrawing its forces on Oct. 9. The date was delayed two days when Ukraine postponed the pullout of some of its own forces because of artillery fire between both sides in the conflict in eastern Ukraine. At the same time, the Azov Battalion — a right-wing, pro-Ukrainian paramilitary group — announced on Oct. 7 that it was taking up positions in Zolotoe, a village on the line of contact. Ukrainian forces would likely have to leave Zolotoe as part of a withdrawal, but the Azov Battalion's leader has said his forces will not abandon the village.

Despite Ukrainian President Volodymyr Zelenskiy's desire to work with Russia to resolve the conflict in eastern Ukraine, there are many obstacles on the path to peace. The hindrances include not only the full implementation of a political settlement under the 2015 Minsk agreement and related Steinmeier formula, but also the initial tactical step of pacifying the front lines in eastern Ukraine. Attempts to sabotage Zelenskiy's efforts by paramilitary groups that oppose his approach could prevent separatist forces from reciprocating a withdrawal by Ukrainian armed forces, should Ukrainian forces indeed initiate a pullout.

The battlefield isn't the only place where Zelenskiy is facing resistance to his agenda. About 10,000 Ukrainians rallied in Kyiv on Oct. 6 against the president's apparent support for the so-called Steinmeier formula, which would grant special status to the separatist region of Donbas and stipulate the withdrawal of Ukrainian forces from the contact line in Donbas. Popular resistance will limit Zelenskiy's efforts to resolve the Ukrainian conflict and may force him to stand firm on the withdrawal of Russian forces from eastern Ukraine, the return of the Ukrainian-Russian border to Ukrainian control and other demands that could doom negotiations to failure.

Ukraine: Zelenskiy's Peace Effort Encounters Resistance is republished with the permission of Stratfor Worldview, a geopolitical intelligence and advisory firm.