Ukraine's Surrender of Its Nukes Was a Major Strategic Blunder 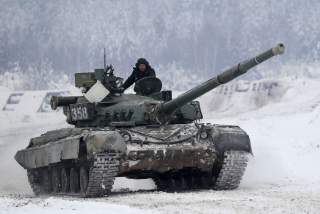 Key point: Without nukes, Kyiv had no deterrent against Moscow's aggression.

U.S. policymakers are scrambling to craft a coherent response to Russia’s invasion and occupation of Ukraine’s Crimea region. There is an undercurrent of worry that the Crimea intervention may be just the first move in a campaign by Vladimir Putin either to detach much of eastern Ukraine from Kiev’s control or to oust the new Ukrainian government and bring all of the country firmly into Moscow’s orbit. Despite the abundance of rhetorical posturing, though, there is little that the United States and its European allies can do to prevent Russia from pursuing its goals regarding Ukraine—unless they are willing to risk a military confrontation with a nuclear-armed power in its own neighborhood. And no sane person advocates that. Even Senator John McCain concedes that U.S. military intervention is not an option.

Ironically, Washington itself adopted a policy two decades ago that eliminated the one factor that might have deterred Putin from using military force against his neighbor. When the Soviet Union dissolved at the end of 1991, Russia was not the only successor to inherit the USSR’s nuclear weapons. Ukraine (along with Kazakhstan and Belarus) also did so. Ukraine alone had nearly four thousand such weapons on its soil. But U.S. leaders were adamant that those countries relinquish their newly acquired arsenals, leaving Russia as the only nuclear-armed successor state.

Washington adopted a concerted carrot and stick strategy to persuade the newly independent countries to turn over their nukes to Russia. The main carrot was the promise of generous aid packages—not a small consideration for governments now struggling with an assortment of major economic woes. The financial inducements, though, were predicated on their willingness to fully cooperate in Washington’s effort to roll back the inadvertent proliferation that had occurred with the USSR’s disintegration. The stick was an implicit, but unsubtle, message that if they insisted on keeping their inherited arsenals, the United States would treat them as it would any other “rogue” proliferators and lead an international effort to isolate them, diplomatically and economically.

The strategy worked. A handful of nationalists in Ukraine and Kazakhstan, suspicious of the Kremlin’s long-term intentions, believed that independent nuclear deterrents were the best way to guarantee that there would be no Russian effort to reconstitute the Soviet empire. A few international relations experts in the United States made similar arguments and derided the antinuclear campaign as shortsighted.

University of Chicago Professor John Mearsheimer, widely considered the dean of hardcore foreign-policy realists in the academic community, was especially outspoken on that point. Writing in the summer 1993 issue of Foreign Affairs, he noted that the United States and its European allies “have been pressuring Ukraine to transfer all of the nuclear weapons on its territory to the Russians, who naturally think this is an excellent idea.” Mearsheimer emphatically disagreed with that approach. He argued that a Ukrainian nuclear deterrent is “imperative to maintain peace between Russia and Ukraine. That means ensuring that the Russians, who have a history of bad relations with Ukraine, do not move to reconquer it.” In a prophetic passage, he added: “Ukraine cannot defend itself against a nuclear-armed Russia with conventional weapons, and no state, including the United States, is going to extend to it a meaningful security guarantee. Ukrainian nuclear weapons are the only reliable deterrent to Russian aggression.”

The key term was a meaningful security guarantee. In 1994, the United States, Russia, Ukraine, and Britain did sign the so-called Budapest Memorandum, an agreement pledging to respect Ukraine’s sovereignty and current borders. That agreement also contained security “assurances” to Kiev from the other three signatories. But whatever the language in those assurances, the current crisis underscores the ineffectual nature of such paper promises. The United States has neither the desire nor the ability to defend Ukraine.

Even the most hawkish American politicians and pundits speak only of imposing economic sanctions on Russia and making a show of U.S. military power in Eastern Europe, primarily in the Baltic region and the Black Sea. The former might inconvenience Russia, and would certainly create diplomatic tensions with Moscow, but it is unlikely that they ever could be potent enough to cause Putin to abandon his agenda regarding Ukraine. And a grandiose deployment of warships to the Black Sea and fighter planes to the Baltic republics has the unique feature of being simultaneously provocative and ineffective—the worst possible combination.

The reality is that the United States threw away the one high card it had to play more than two decades ago. Unfortunately, Mearsheimer and other academic dissidents had little influence and were unable even to slow, much less halt, the drive to de-nuclearize all USSR successor states, except for Russia.

True, if Ukraine had retained its nukes and Putin had nevertheless gone ahead with his military intervention in Crimea, that crisis would be more dangerous than the current version. But it is highly improbable that the Kremlin would have adopted such a risky course against a nuclear-armed country. Moscow received a great geopolitical gift when Washington succumbed to its obsession to oppose nuclear proliferation in all cases, regardless of the strategic circumstances. That move effectively disarmed Ukraine and made it vulnerable to coercion by its much stronger neighbor. Both Ukraine and the United States are now paying the price for that myopia.

Ted Galen Carpenter, a senior fellow at the Cato Institute and a contributing editor to The National Interest, is the author of nine books and more than 550 articles and policy studies on international affairs. This first appeared in March 2013.