Ukraine's Turkish Drones Are a Real Pain for Russia 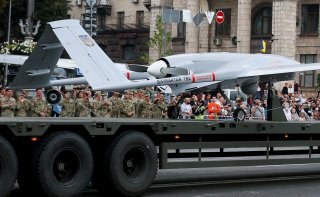 In a video posted to the General Staff of the Armed Forces of Ukraine’s Facebook page, footage taken by an unmanned aerial system shows an artillery position in Donbas hit in an air-to-surface strike.

The footage (about a minute long) shows a Turkish-made Bayraktar TB2 Unmanned Aerial Vehicle (UAV) dropping a bomb right on top of an artillery piece, thought to be a Soviet-era D-30 122mm howitzer. Immediately following impact, several of the artillery piece’s crew scatter, running off into a nearby field.

A caption accompanying the video stated that the Bayraktar drone “was used by the order of the Commander-in-Chief of the Armed Forces of Ukraine. The unmanned aerial vehicle did not cross the line of contact and destroyed one gun of the crew of the Russian occupation forces with a guided bomb.”

“We really have special and good relations with Turkey, but in this case, unfortunately, our fears are confirmed that the supply of such types of weapons to the Ukrainian military could potentially lead to destabilization of the situation on the line of contact,” Peskov explained, commenting on the recent Ukrainian drone strike.

“We see that as soon as such weapons fall into the hands of the military, they can potentially be used in this region of Ukraine, and this only leads to destabilization,” Peskov said. He also emphasized that in his opinion, “this does not contribute to the settlement of this internal Ukrainian problem.”

Ukraine bought the Turkish drones in 2019 0r 2020. Manufactured by Baykar, an aerospace firm, the drone in question is the company’s TB2. Though it is not the largest or most sophisticated of the company’s offerings, the TB2 has a maximum altitude of 27,000 feet and a 27-hour flight endurance. In addition, dual underwing pylons can carry a combined total of 150 kilograms of munitions, or about 330 pounds.

The TB2 splashed across headlines last year when Azeri forces used the drone to significant effect during the 2020 Nagorno-Karabakh conflict against Armenian forces.

Turkey’s TB2 sale to Ukraine is also accompanied by a training center and, in the future, a TB2 production facility. As a result, the arms deal has the potential to upset the delicate diplomatic and power balance between Moscow and Ankara.

In 2017, Turkey inked a deal with Russia for an S-400 air defense system, prompting Turkey’s expulsion for the American-led F-35 Joint Strike Fighter program, as defense analysts surmised the S-400 could be used to glean information on the F-35’s stealth characteristics.