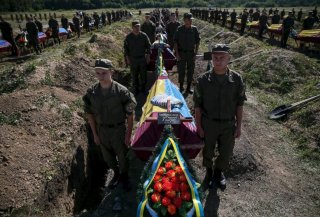 The chief of Ukraine’s armed forces has confirmed that roughly 9,000 Ukrainian military personnel have been killed in the ongoing war against Russia, according to a new Reuters report.

The information disclosed by Gen. Valeriy Zaluzhnyi is believed to be the first provided by the country’s top military brass since Russia's invasion in late February.

In a news conference on Monday that honored military veterans and the families of those killed, Zaluzhnyi contended that children needed more protection in many regions of the country, including the capital city of Kyiv.

“They really do not understand anything that is going on and definitely need protection ... because their father has gone to the front and possibly is among the almost 9,000 heroes who have been killed,” said Zaluzhnyi, who provided no further details on whether the figure he cited included all service personnel killed in action, such as border guards.

During the same news conference, President Volodymyr Zelenskyy noted that about one million people were defending Ukraine as part of the country’s armed forces or other services.

Zaluzhnyi did not mention any figures related to civilian or Russian military personnel deaths. Reuters reported that the General Staff of Ukraine’s armed forces has estimated that the Russian military death toll is more than 45,000. Russia has not divulged how many of its soldiers have been killed.

Meanwhile, Zelenskyy has sounded the alarm that Russia could be planning a major attack ahead of Ukraine's upcoming Independence Day celebrations. The country is preparing to celebrate thirty-one years of freedom from Soviet rule on August 24.

Reports have indicated that Russian forces have positioned more cruise-missile-bearing warships in the Black Sea. Meantime, large gatherings in Kyiv have been prohibited for most of this week.

According to CNBC, on Sunday night, Russian shelling struck cities near Ukraine’s Zaporizhzhia nuclear power plant, the region’s governor reported via Telegram, adding that homes and other civilian infrastructure had been destroyed or damaged.

Notable leaders worldwide, including International Atomic Energy Agency (IAEA) director-general Rafael Mariano Grossi, have warned that the Zaporizhzhia nuclear plant, the largest in Europe, is on the verge of a potential nuclear disaster from the ongoing fighting.