Ukrainians Are Winning the Information War Against Russia 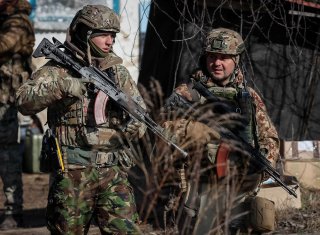 Russia’s information operations and propaganda do not appear to be successfully influencing public opinion around the world about its invasion of Ukraine.

“Outside of Russia there's little to no evidence that their information ops are working,” an unnamed senior Department of Defense official said on Thursday. “In fact, we've seen quite the opposite. Ukrainians are doing a good job staying ahead of the information ops.”

Russia has closed or stifled most independent media operations within Russia. It has also arrested protestors and others raising questions about the war in Ukraine.

That has created an environment where many Russians have publicly supported the war.

“In Russia, anecdotally, we see their narratives having more of an effect,” the unnamed official said. “But then again, they've shut down the independent media. The only thing available to most Russians now is state media, and so you would expect that those narratives would be more widely consumed, and even more widely believed.”

One instance came when Russia accused Ukraine of a strike in the Donbas region. In reality, it was Russia that carried out the attack.

“You're seeing it mostly in that Donbas area,” the defense official said. “Interestingly enough, in the Russian state media, if you look at the narratives coming out of there, they don't talk a lot about anything else in Ukraine. A lot of their coverage is of the Donbas area and the accusations of Ukrainian terrorism and that kind of thing. But you're not seeing a lot in Russian state-run media about things elsewhere in Ukraine and how they're going.”

“(Ukrainians are) doing a good job communicating to their own people, not to mention the world, and using social media to great effect,” the defense official said. “So we just haven't seen the Russians have much success in the information ops thing.”