The Unclassified Version of the UFO Report is Hitting the Desks of U.S. Lawmakers 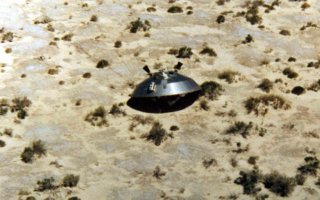 Later this month, U.S. lawmakers will get to learn a bit more on what may be "out there," as top intelligence and military officials are now scheduled to release a report addressing so-called "Unexplained Aerial Phenomena" or UAPs. The highly-anticipated unclassified report will provide insight into what is actually known about the UAPs – which are more commonly known still as UFOs.

It isn't clear if the reports will shed any light on recent military encounters with UAPs as it relates to proof of contact with "extraterrestrial life." However, the report – which was commissioned by Congress – has already garnered so much attention that speculation has run rampant on what it may actually reveal about the UAPs when it is finally released.

Originally slated to be released on June 1, the report is running late. There is already speculation that this is because of what is "known." However, as the law directing intelligence agencies and the Department of Defense (DoD) to create the study was not technically binding, there has been leeway in when it will be released. The preparation of this report is notable however in that UFOs or UAPs have gained renewed interest in the public consciousness following the U.S. Navy's release of once-classified videos of encounters with such UAPs in recent years.

Those "close encounters" haven't been fully explained by military officials.

"What is true, and I'm actually being serious here, is that there are – there's footage and records of objects in the skies, that we don't know exactly what they are," former President Barack Obama said last month upon news of the report's commission according to USA Today.

"We can't explain how they moved, their trajectory," the former president added. "They did not have an easily explainable pattern. And so, you know, I think that people still take seriously trying to investigate and figure out what that is."

Those recently released Navy videos raised interest within the UFO community, but also among members of Congress – in part because lawmakers have expressed concerns that the UAPs may not be "otherworldly," but rather could be advanced technological threats from foreign adversaries.

Sen. Marco Rubio (R-Florida), who previously served as the chairman of the Senate Select Committee on Intelligence, succeeded in including language in the Intelligence Authorization Act late in 2020 that required the intelligence community to prepare for the committee a detailed unclassified report on UAPs, ABC News reported.

"Men and women we have entrusted with the defense of our country are reporting encounters with unidentified aircraft with superior capabilities," Rubio said in a statement provided to ABC News. "We cannot allow the stigma of UFOs to keep us from seriously investigating this. The forthcoming report is one step in that process, but it will not be the last."

It is rather unlikely the report will yield anything truly surprising, and that is because most UFOs or UAPs have rather mundane identities that can include weather balloons, lenticular clouds, Fata Morgana (mirages), meteors and more recently drones. Moreover, many of the sightings of UFOs in the 1950s and 1960s may have simply been experimental aircraft including the SR-71 and U-2, and even now advanced aircraft can be misidentified as UAPs.

However, there is still much that can't be explained – and the report will attempt to address the sightings of UAPs and what they could be, including considering whether the objects could be next-generation technology from an American competitor such as China. While it is unlikely to answer every question, the report has been seen as a good start in getting to the question: what exactly is out there, and does it pose a threat?