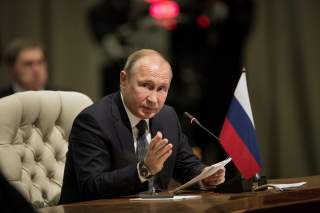 Just why is Vladimir Putin so popular? Practically since Russia’s president first ascended to power in the last days of 1999, observers have puzzled over his broad base of support and enduring appeal, which has persisted despite needless and costly foreign entanglements and notwithstanding widespread and flagrant corruption in the Kremlin.

The answer, one of Russia’s leading opinion centers has concluded, has everything to do with a pervasive sense of cultural siege. According to the latest poll released by the Moscow-based Russia Public Opinion Research Center (VTsIOM), the results of which have been detailed in The Moscow Times, a majority of Russians now believe that their country is the target of a vast, organized conspiracy aimed at weakening Russia by subverting its society and culture.

Specifically, two-thirds of the two thousand Russian citizens surveyed by VTsIOM in a nationwide survey carried out in late May are convinced that “there is a group of people who seek to rewrite Russian history and replace the historical fact in order to hurt Russia and diminish its greatness.” Another 63 percent concur that “a group of people are trying to destroy the spiritual values formed by Russians through the propaganda of non-traditional sexual relations.”

These views, moreover, are not those of the uninformed or uneducated. Rather, as the Times details, “the older a respondent became, and the more educated, the more likely they were to agree with the statements referencing a group of people working to undermine Russia in some form.”

Even in Russia’s increasingly authoritarian political climate, where the results of any polls and opinion surveys should be considered suspect, such statistics are striking. They suggest that the secret of Putin’s enduring political success stems at least partly from a sizeable base of Russians who are deeply nervous about the erosion of national identity—and eager to blame the outside world for it.

It is an attitude that has been actively nurtured by the Kremlin as a way of strengthening its hold on power. For more than a decade, Russians have been fed a steady diet of anti-Western and anti-democratic rhetoric via a massive state-orchestrated campaign of propaganda. The narratives are familiar, and focus on NATO efforts to encircle Russia, the decadence of liberal European societies, and Russia’s unique civilizational identity—themes that reinforce the idea that Russia is apart from, and fundamentally threatened by, the existing global order.

The results are predictable. Putin has come to be seen by many in Russia as a dependable bulwark against the subversive policies of liberal elites in Washington and European capitals. And as a result, the Kremlin’s persistent efforts to muzzle free media, to limit the activities of foreign NGOs, and to undermine the political systems of Western democracies have tended to garner support rather than outrage from ordinary Russians, despite the very real economic and political costs that the country has incurred as a result.

For the time being, at least, this state of paranoia appears to be a permanent condition. Russia’s president, who recently won his fourth term in office, faces no real competitor for the country’s top job, despite sporadic signs of grassroots discontent throughout the country. Indeed, Putin’s loyalists are working diligently to strengthen his hold on power (including through recent legislative measures to amend the country’s constitution to permit a third consecutive presidential term, something which would allow Putin to remain in power until 2030).

But whenever Putin does leave the political scene, a new leader could well choose to improve relations with the West, and Russian propaganda will change accordingly. So too, over time, will national attitudes. If Putin is succeeded by a strongman of the same ilk, however, that leader will benefit from a deep font of anti-Western conspiratorialism that has been carefully cultivated over the past two decades by the current inhabitant of the Kremlin.