United Auto Workers on National Strike for First Time Since 2007 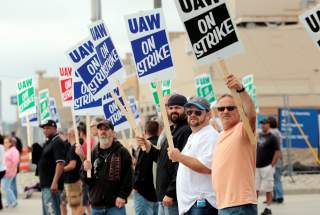 About 49,000 members of the United Auto Workers union (UAW) could strike against General Motors at midnight Monday.

About 49,000 members of the United Auto Workers union could strike against Detroit-based General Motors at midnight Monday unless an agreement is made with the car manufacturer.

UAW’s contract of four years with GM expired Saturday night, and its members from all over the country are demanding fair wages, job security, affordable health care and other benefits — and threatening to strike if those demands are not made before 12 a.m. Monday, according to a Sunday statement from UAW.

It would be the union’s first national strike since 2007, The Washington Post reported.

“We do not take this lightly. This is our last resort.”

“We stood up for [GM] when they needed us most,” UAW Vice President Terry Dittes said in a statement. “Now, we are standing together in unity and solidarity for our Members, their families and the communities where we work and live.”

UAW National Bargaining Committee Chair Ted Krumm said in a similar statement, “We have been clear at the table about what GM members have indicated we will accept. We are standing up for what is right. We as local unions will sacrifice to stand up for what we deserve.”

“Our members have spoken; we have taken action; and this is a decision we did not make lightly,” Krumm continued. “We are committed to a strong contract at GM that recognizes our UAW members, who make some of the greatest products in the world and make GM so profitable.”

GM said it offered 5,400 new jobs, $7 billion in investments and wage benefits including better profit-sharing and health care plans, according to a Sunday statement.

The offer we presented to the UAW prioritizes employees, communities and builds a stronger future for all. It includes improved wages and health care benefits, over $7B in U.S. investments and 5,400 jobs. Let’s come together and secure our shared future: https://t.co/1QVtUokpis pic.twitter.com/Iss4S38Ozs

“We presented a strong offer that improves wages, benefits and grows U.S. jobs in substantive ways and it is disappointing that the UAW leadership has chosen to strike at midnight tonight,” the car manufacturer said in a statement. “We have negotiated in good faith and with a sense of urgency. Our goal remains to build a strong future for our employees and our business.”

2020 Democratic candidates Kamala Harris and Joe Biden voiced their support for the strikers on Twitter Sunday.

“Standing in solidarity with auto workers as union contract negotiations continue for higher wages [and] new products at underutilized plants. There is nothing more powerful than workers coming together to stand up for their rights [and] the dignity they deserve,” California Sen. Harris wrote.

Standing in solidarity with auto workers as union contract negotiations continue for higher wages & new products at underutilized plants. There is nothing more powerful than workers coming together to stand up for their rights & the dignity they deserve.https://t.co/796uXHcHk9

“A job is about a lot more than a paycheck. It’s about dignity and respect,” former Vice President Biden wrote. “Proud to stand with [UAW] to demand fair wages and benefits for their members. America’s workers deserve better.”

Over 1,000 Teamsters will refuse to move GM vehicles to dealerships if UAW follows through on plans to strike, International Brotherhood of Teamsters spokesman Bret Caldwell said, according to WaPo.